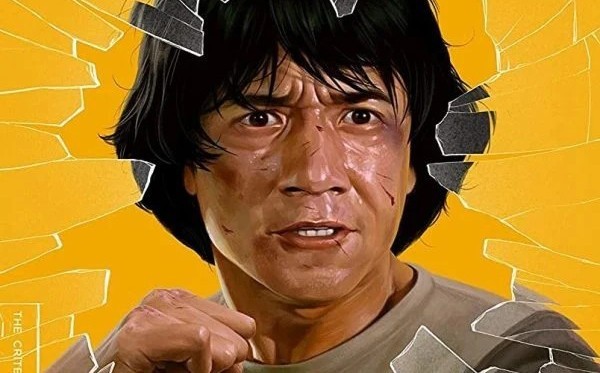 With Jackie Chan celebrating a birthday recently, I thought it high time I offered up a list of 10 essential films from the master of physical action comedy. His popularity has spread across the world from Hong Kong and China, to the west (even after early false starts to launch him as a star in the States). In the mid-80’s he was part of a collective of dynamic physical performers who revolutionised action cinema and the way a fight scene could be choreographed, shot and edited. Among the likes of Sammo Hung and Yeun Biao, Chan was the charismatic superstar and the one who put life and limb on the line to extremes no other mainstream star had seemingly done, since the long past days of Buster Keaton. For a time, high octane action and crazy stunts had a poster child, and his name was Jackie Chan. Here are 10 essentials:

A lot of stars came and went in the decade following the death of Bruce Lee. No one quite matched the inimitable stars presence and charisma. The trouble is, a lot were trying to follow what made him so popular. With Drunken Master, stunt man turned leading man, Jackie Chan put in place the seeds of a formula that felt perfect for him. It’s an iconic martial arts film, focused on a student learning the art of drunken martial arts. What makes the film work, aside from being directed by a certain Yuen Woo-Ping (known more in the West for choreographing The Matrix, and Crouching Tiger Hidden Dragon), is Chan’s innate gift for physical comedy. The film would follow the kind of style and period setting so popular at the time in HK/Chinese martial arts cinema, and alongside a few others in the late 70’s, early 80’s (like Snake in The Eagles Shadow) would launch Chan to stardom.

Three hugely popular stars with almost telepathic chemistry, converged for one of many great projects together (not limited to on screen co-starrers either). Between them, Chan, Sammo Hung and Yeun Biao would garner a reputation as three masters of action direction and fight choreography. Chan and Hung directed this film and with it, they took their careers (Chan’s in particular) to new and exciting places. The blend of high energy, frantic martial arts, physical comedy and stunts was backed up by an almost pedantic, perfectionist approach to shooting action. Hung in particular as a choreographer and director set an extremely high bar, and these films could spend months on end just shooting action sequences. They were pieced together with an often segmental and sequential approach on single camera (as opposed to the old master and wide on two cameras). The old way of shooting long portions of choreography was gone for a broken down, bit by bit approach, creating a new pace and rhythm to fight scenes. Project A, which also starred the three sons, was groundbreaking, fantastically entertaining and also fairly epic in its scope for the time. The whole gang get their chance to shine, Chan performs all manner of insane stunts (including his infamous clock tower fall), and there’s also great support in the form of bad guy extraordinaire, Dick Wei (who gathered a rather fearsome reputation for injuring co-stars). 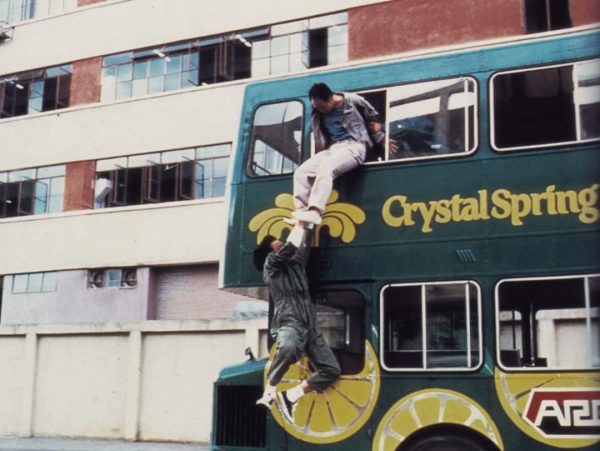 There didn’t seem to be too much call for contemporary settings in the martial arts genre back then. Police Story marked another huge moment in HK action cinema in that respect, whilst also doubling down on stunts and chaos. Additionally, Chan’s effortless blend of comedy hijinks and silliness was well matched with a little more of a dramatic focus in places too. There’s a bit of intensity at times as Chan goes about taking down a dangerous criminal enterprise. Here he’s backed by a great cast, including Maggie Cheung and Brigitte Lin who would go on to be particularly productive with Wong Kar Wai. Everything here builds to a stunning climax in a mall that epitomises just how exceptionally designed action scenes were in these peak years, and just how dangerous. It culminates in another classic Chan stunt that sees him pole slide from the top floor of a mall, through chord lights in an eruption of sparks and middle finger to gravity.

Jackie Chan does Indiana Jones. A clear nod to the popular cinema of the West around that time, Chan probably had half a mind on international recognition. He continued his penchant for physical comedy, screwball moments and the kind of on screen elements that can transcend language. In my early days of Chan-Fandom this was a particular favourite. It had a certain exotic question aspect that worked well but was also backed with Chan meeting his now astronomical standards for crafting action sequences. All the fights are particularly great, but the opening (all casual racism aside) which sees Chan robbing an artifact from an African tribe, is spectacular. A fight with five Amazonian women is also great, and the film includes some excellent car chases too, expanding beyond hand to hand. As per normal, it ends pretty spectacularly too, in a film where Chan almost bought it (his infamous post credits bloopers showing one particularly nasty looking injury). The latter first sequel, Operation Condor is as good (some may attain, even better).

Jackie Chan vs Benny ‘The Jet’ Urquidez, part 2. They first battle brilliantly in Meals on Wheels (which is great) but this one just pips it for me. It’s a cool film, with Chan, Hung and Biao teaming up to bring down a drugs cartel run by Benny the Jet and Yeun Wah. There’s wall to wall great action and the requisite great chemistry between the three leads. The finale setting is also brilliant with some stunning action, not least the showdown between the fearsome look Jet and Jackie.

A beautifully designed and raucously enjoyable homage to classic American gangster cinema, finds Chan’s ‘Canton Godfather’ doing a riff on Frank Capra (A Pocket Full of Miracles). It’s not quite as iconic as some of Chan’s other aforementioned films of the era, but it’s still blessed with some spectacular set pieces and the aesthetics are magnificent. It’s a film on a scale that few but Chan at this time could produce out of Hong Kong.

Rumble In The Bronx

From Battle Creek Brawl, to Cannoball Run (1 and 2), to The Protector, Chan’s attempts to break America had never quite landed. For one reason, the respective films never utilised his talents to the extent he deserved. Rumble In The Bronx would prove a first significant Western breakthrough, where audiences finally noticed his auspicious talents and physical dynamism. An audience weaned on Van Damme and Seagal suddenly saw Jackie Chan leaping hither and dither, pinballing himself around the mise-en-scene like an escape firework. When I first saw this one on video it was jaw dropping. Not only was this dude comedic and engaging as a leading performer, but the action and fight scenes were exceptional. The sheer imagination in how Chan was conjuring set pieces and the very deliberate placement of every piece of furniture or prop on set, made for something that was completely wild to the uninitiated. It would be after Rumble in the Bronx that myself, and many would go back retrospectively to find what Hong Kong and mainland Chinese audiences had been watching for over a decade. It’s perhaps mid-level in a CV to that point, but was a real moment where Chan finally smashed that glass ceiling. 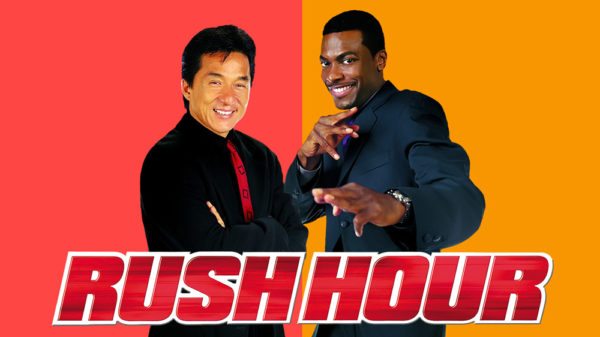 The glass ceiling had been smashed. Now Chan leaped out and the world really took notice with the smash hit, Rush Hour. It was his big studio debut in American film, a buddy up fish out of water comedy alongside Chris Tucker. Director Brett Ratner made the sensible decision of letting Chan and his team handle the action scenes. Whilst he didn’t have the same freedom of time to bring it quite to HK par, the set pieces in Rush Hour are still immensely enjoyable. Chan is, as per usual, effortlessly likeable and endearing even in a film where some of the humour has probably dated. As a double act there’s no doubting a certain chemistry that Chan and Tucker had here, and in the first sequel too.

Around the same time as cementing Hollywood big time, Chan also made his last great HK extravaganza. His returns since haven’t been as engaging as his peak era as the industry changes combined with the natural restrictions that age bring (though he still continues to physically impress). Who Am I? sees Chan do Jason Bourne before Bourne was a movie entity. It’s an engaging story resting on Chan’s star power and though this doesn’t quite have the same kind of infinitely creative spark of his earlier Hong Kong work, it is still blessed with a number of great moments in an enjoyable espionage caper. The particular highlight is a 2 on 1 fist fight on the roof of a skyscraper, whilst the film also had a distinct aesthetic (and some English language) to try and keep Western audiences keen.

We’ve seen Chan look mistily eyed back to period settings and go historical. However, Chan in the Wild West? Now this was something. Shanghai Noon, the sophomore Hollywood vehicle for Chan, once again partnered him up with a comedic co-star. Again there was a very definite chemistry between himself and (in this occasion) Owen Wilson. It’s a lot of fun. There’s a certain novelty about Chan in chaps I suppose whilst Wilson is enjoyably laconic and laid back, particularly in comparison to Tucker’s motor-mouthed over the top demeanour in Rush Hour. It’s funny, it’s very well shot and whilst the action might actually be a weak point, even in comparison to Rush Hour, there are still enjoyable set pieces. Lucy Liu is atypically dazzling to behold, and gets a little bit more to do than just be a damsel. The sequel had a little too many in jokes about period figures, but was enjoyable regardless.

What is your favourite Chan film? Let us know on our social channels @flickeringmyth…