Calum Petrie reviews Cyberpunk 2077: You Have My Word #1… 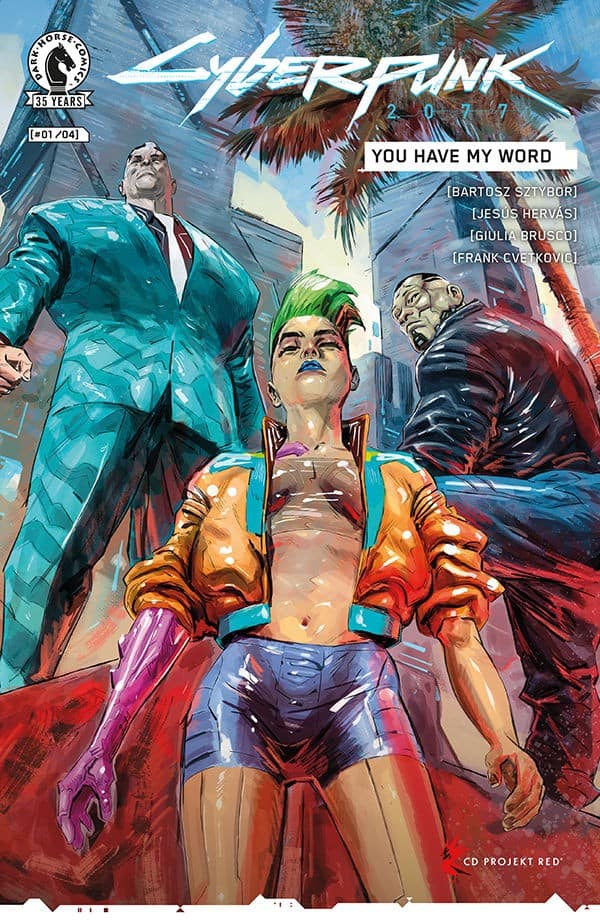 Night City is an extremely complicated place, a city ruled by corporations and gangs, and police barely get a say in the running of things. The city is a living organism that is fuelled by economy, civilisation and crime, which is a good thing that it makes for extremely compelling stories.

The last Cyberpunk comic series I reviewed was based around the Trauma Team, which is an elite hit squad/ambulance squad, whereas this is a very different affair. Focusing more on the criminal element of Night City, this is a tale of deception, family and death.

We open onto a brightly coloured mural portraying the beliefs and traditions of the Valentinos. The sight is familiar as the gang is one of the bigger factions in Night City, we find our three mercs standing outside waiting to meet the fixer. To anyone familiar with the game world of Cyberpunk 2077 this is just how jobs are carried out – you meet the fixer, get the job and on your way; once it is complete everyone gets paid.

The story here is that our female character, Oriona, has intentions of getting money and then escaping the merc life and taking her daughter somewhere with money under their belts. Oriona’s mother and father are looking after her daughter in the meantime, living on the outskirts of town and keeping themselves to themselves. Living a quiet and honest life is a lifestyle not many are accustomed to in Night City.

The story plays out in an extremely familiar universe, while building on the rich and deep world built for the game. I am not sure how this would read to someone unfamiliar with the game, yet being able to visualise the world offers an added layer of immersion. Imagining the static caravan in the middle of nowhere with nothing but silence and desert as its backdrop is simple, beautiful and tactical.

The twist towards the end of the issue has the reader sitting up right and paying attention in the closing pages. Fate’s ugly head has turned and now we have a mystery, a body and a family no doubt looking to seek revenge.

I loved this first issue. The story that Bartosz Sztybor has created and Jesus Hervas has drawn compliment each other, crafting a beautiful and dark tale. As the issues progress I am interested to see if this remains a murder/mystery-type story or if we are going down the John Wick route, but either way I am invested from issue #1.