The original line-up included characters like Jay Garrick and Alan Scott, the original Flash and Green Lantern respectively, Hourman, Doctor Fate and Hawkman with Wonder Woman and Black Canary being added to the team later. While the Justice Society may not be as popular as the Justice League now, the JSA was a pretty big title for several years after its creation and remains a favourite among fans, so much so when DC wiped away the JSA out of continuity in their 2011 reboot many fans cried foul. In a few weeks the Justice Society will receive their first feature length animated adventure Justice Society: World War II, the latest film in DC’s line of original animated movies. It follows Barry Allen’s Flash as he accidentally travels back in time, landing in Nazi-occupied France and meets the Justice Society, a team of secret superheroes led by Wonder Woman. Flash teams up with them to uncover the Nazis’ latest scheme and find a way to travel back to his time.

We got to chat with Castle star Stana Katic, who voices Wonder Woman in the film. Katic herself is no stranger to the DC universe as she previously voiced Lois Lane in the 2013 animated film Superman: Unbound as well as Talia al Ghul in the video game Batman: Arkham City. We talked about Wonder Woman’s legacy, her relationship with Steve Trevor, why she has been viewed as an icon for so many decades and Katic’s thoughts on now having played three of DC’s most significant female characters. Check out our interview below… 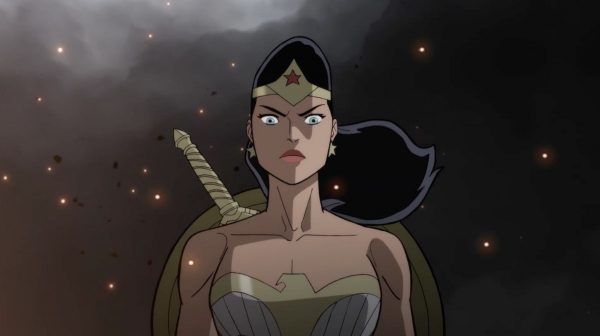 Ricky Church: In Justice Society: World War II, you get to play Wonder Woman in the movie. Was it intimidating to step into her iconic shoes?

Stana Katic: It was exciting!

She’s one of the most popular superheroes ever and has remained so since her creation 80 years ago. Why do you think she’s been so popular for so long?

I think it’s like a blend of a million and one reasons. I think that this is something that speaks to all of us that’s a part of Western mythology from Grecian times. I think that the Greek spoke about these Amazon warriors and people have drawn them, painted their versions of them, put them on clay, flasks for thousands of years and to be able to give life to that character and those images in some way I think is something that’s maybe more embedded into our DNA than we even realize.

Now in this movie, Wonder Woman is leading the Justice Society and she’s deeply respected by her teammates. They have formed not just a good working team, but actual deep friendships. What is it about her that you think makes her such a great natural leader?

I think she’s a non-predatory leader so she’s capable of leading a team with a level of compassion and heart and with a tremendous amount of composure and focus. I think that’s something that is sort of a characteristic of the best leaders out there. 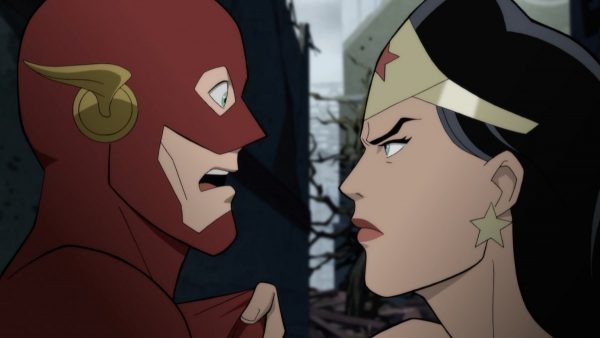 Obviously with it being WWII we don’t see Wonder Woman fighting your typical supervillains, but Nazis. Since war is such a heavy subject matter, what was your reaction to the film’s setting?

I loved the film’s setting. This is something that Butch Lukic [supervising producer] and his team surprised me with when I got to finally see the final version of the film. I was blown away with the beautiful artwork in the background. In fact, I asked Butch and his team where they got the inspiration for all of that. They spent a lot of time traveling and bringing those sorts of memories and images out on the screen. Look, this is a story about right, good versus evil and I think that we’re in a time period where people are feeling out of balance and the sort of general state of flux is very distressing. It’s very difficult to navigate for a lot of the world. To be able to see a hero, a heroine with integrity, and to see a leader with integrity, with accountability, to speak on behalf of what is right in the face of evil I think it’s tremendously comforting right now.

Yeah, for sure. Wonder Woman has a great and interesting arc with Steve Trevor. What can you tell us about that, how you balanced her warrior side with the more romantic side of her as Steve and Diana try to be together while not making it difficult for the team or for themselves?

I feel like I have to credit Chris Diamantopoulos a lot for that chemistry. His version of the character was what gave that cat and canary feel, that sort of roguish quality. I feel like a lot of the chemistry played because of what he brought to the table. As far as their relationship is concerned, she’s a character who’s conflicted between being fully focused on saving the world, on saving humanity, on making sure that she completes the goal, the mission and doesn’t see space or room for a personal relationship until that is done. In many ways I’m sure she’s just seen so much ugliness that until the world is calm again it’s difficult to see beyond the task at hand. That’s something that Flash is also sort of struggling with and so in some ways her journey informs Flash’s journey and she learns a big lesson by the end. For sure. Now what’s interesting is that a few years ago you starred in another DC animated movie, Superman: Unbound, where you played Lois Lane. That makes you starring as two of DC’s strongest and most famous women. What is that like for you to be both a Wonder Woman and Lois Lane?

I also got to play Talia al Ghul!

I love these characters! They are in different ways sexy, sassy, smart, strong, all the S’s. Just amazing women so to play and to be able to lend a voice to them, I mean, for me it’s a gift, you know. It’s like a kid in a candy store for me. I would do it any time, any day. These characters were just such a pleasure to participate in their creation.

Do you have a favourite among those three?

This sounds like a cop out, but I really do love them all actually. They’re different. Like Lois Lane, she’s sassy. She takes no guff and she’s got this feeling of a 1940s kind of dame, you know. And then Talia al Ghul, she’s exotic and sensual and mysterious and then Wonder Woman’s just plain old bad-ass leader with integrity. I really love these three characters and I love so many qualities in each of them. Now Wonder Woman has some pretty cool action scenes in the movie. Do you have a favourite?

Yeah, I know right! I told the guys ‘Oh my god, this girl is such a bad-ass! Thank you so much!’ (laughs) And with all the grunting and throwing around of myself I was doing in the sound room I’m so chuffed to see that on the screen. No, she’s a killer, she’s a badass. Do I have a favourite? Oh my god. I don’t know. I really liked them all! I think they’re all – ooooh wait. No, there’s one, there is one moment… No, they’re all good. They’re all good, we’ll just say that.

Awesome. A lot of the Justice Society, even though the characters are as old as Wonder Woman, they’re a little lesser known, at least today with today’s fans. Do you have a favourite among them aside from Wonder Woman now?

I feel like if I say one of the characters that the other actors will be maybe a little hurt. I’ll tell you this much: When I heard their versions of the characters I thought it added so much depth, so much colour and humour. I was really blown away and I told all the group this, I worried that they might think brownnosing, but I really loved what the actors did and how much they added to and contributed to the story. So I can’t pick just one. 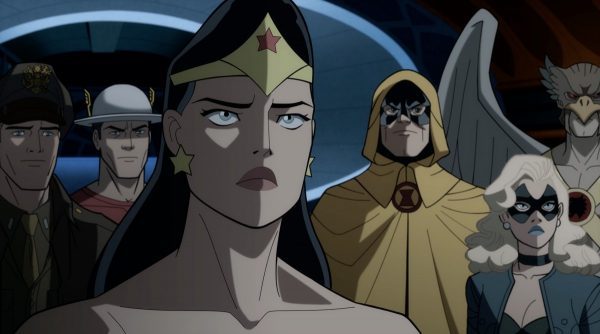 Thank you very much to Stana Katic for speaking with us!