Working in the shadow of his father, Detective Ezekiel “Zeke” Banks and his rookie partner take charge of an investigation into grisly murders that are eerily reminiscent of the city’s gruesome past. Unwittingly entrapped in a deepening mystery, Zeke finds himself at the center of the killer’s morbid game.

“Prepare to be underwhelmed,” Chris Rock’s protagonist tellingly says to his partner early in Spiral, the ninth entry into the Saw franchise, which is being marketed with the clunky sub-title “From the Book of Saw.”

That moniker perhaps serves the purpose of setting expectations appropriately, at least, that this is less a Saw movie than it is Saw-adjacent, taking a long step back from the shenanigans of John Kramer and his cavalcade of apprentices for an almost entirely standalone, self-contained story intended to effectively reboot the 17-year-old IP.

And there are worse ideas to breathe life back into the franchise, honestly. Kramer’s presence nine movies in, after dying way back in 2006’s threequel, would be comical, even though the new killer’s modulated voice sadly can’t hold a candle to Tobin Bell’s dulcet tones. But restarting the series with star names like Chris Rock and Samuel L. Jackson is certainly intriguing enough, while series vet Darren Lynn Bousman – who helmed Saw II, Saw III, and Saw IV – serves as a reliable bridge between franchise epochs. 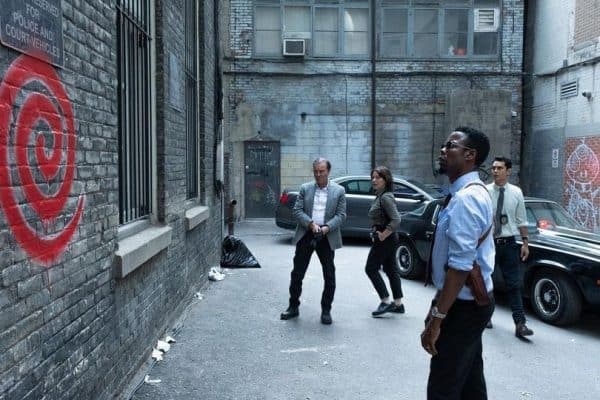 I shan’t say much about the plot here because spoilers are a big part of the fun for fans; know simply that people start turning up dead in Jigsaw-style traps, and it falls to Detective Ezekiel “Zeke” Banks (Rock) and his new rookie partner, Detective William Schenk (Max Minghella), to investigate.

The series has always indulged in frothy police procedural nonsense but never more enthusiastically than here, which with the lavish cinematography and production quality that a $20 million budget allows, is superficially easy to accept as a contemporary riff on Se7en by way of Training Day.

But returning Jigsaw writers Josh Stolberg and Peter Goldfinger make the odd decision to tip the balance far more in favour of a breadcrumb-following cop slog than the expected showcase of elaborate traps. As such, Spiral really ends up feeling like a mediocre thriller dressed up in franchise off-cuts, only stopping periodically to gross viewers out with short, fitfully effective traps in order to not entirely alienate the gorehound faithful. It almost makes one suspect the script was originally a straight-up thriller that was swiftly retrofitted into a Saw movie by a canny producer.

That wouldn’t explain the largely uninteresting gallery of characters on offer, though; most fit pretty basic archetypes as is par the course, but given the flashbacks upon flashbacks which delve deep into the pasts of several crucial characters, it’s a major weakness that so much of it amounts to so little meaningful.

At least Rock and his co-stars largely do their level-best to make this one of the better-acted Saw movies, yet between the oft-creaky dialogue and strained attempts at gallows humour, they’re not given a whole lot to work with. Jackson, who to the surprise of nobody is only here for a handful of scenes, at least gets to quip with glee, “You wanna play games, motherfucker?”

The most radical and intriguing thing the movie does is point the murderous lens at bad police, which it’s done before but never with such a direct vein to reality, delivering pointed social commentary on corrupt, trigger-happy cops. It certainly lends Saw its most barbed topicality since Saw VI took aim at the American healthcare industry, undeniably bolstered by the inspired pairing of Jackson and Rock’s father-son characters, Black police officers as they are. Ultimately, though, even the best Saw movie is only as good as its payoff.

Unfortunately Spiral doesn’t end up going anywhere interesting in this regard; the biggest reveal will likely be spotted a mile away by franchise devotees, especially if they’ve been rewatching the series recently. It’s a rug-pull so shockingly obvious I assumed a double-swerve was being teed up, but that surprisingly wasn’t the case.

Though the overall throughline is wrapped in a potential-rich currency, it ends up an ungainly mix of underwhelming and heavy-handed, very nearly concluding on the dampest squib of the entire series to date – save only for Saw V‘s bizarrely twist-free climax.

Say what you will about Jigsaw but it still felt like a Saw movie in its bones. This? Not so much. Beyond the fleetingly wince-inducing moments of gore-letting, it lacks the visceral edge and grimy atmosphere of the better entries into the series. Anyone hoping for a meaningful mythological tether to the prior movies is also sure to be left bitterly disappointed, no matter how slickly filmed and decently acted it might all be.

The potential for a subversive soft-reboot of the Saw franchise speaks for itself, but Spiral too often feels like a garden variety thriller cynically co-opting the Saw branding. As a result, it falls on the lower-end of the franchise, bettering Saw V and The Final Chapter but by less than you’ll have reasonably hoped with such talent involved.

And yet, even Saw fans left unmoved by Spiral will likely hope it turns enough of a profit at the box office for a sequel, because as unappealing as a follow-up to this particular story is, lore-dense, long-form horror franchises are in desperately short supply these days.