Akira Kurosawa was one of the pioneers of world cinema in the 20th Century directing countless well-loved films particularly within the Samurai genre including Seven Samurai, Ran, Rashomon and one of the main inspirations behind Star Wars, 1958’s The Hidden Fortress. Many of Kurosawa’s films have been adapted in Western Cinema with Seven Samurai reworked in 1960 to form the basis of the classic Western The Magnificent Seven, starring Yul Brynner and Steve McQueen. In this instance the story was moved from rural Japan to the US Mexican border.

One of Kurosawa’s best loved films Yojimbo, celebrates its 60th anniversary this month. Yojimbo tells the story of a nomadic Samurai played by Kurosawa regular Toshiro Mifune who collaborated with the director on an incredible 16 films between 1948 and 1965, with this coming at the peak of Kurosawa’s acclaim.

Yojimbo is often celebrated highly within Kurosawa’s wider canon of work which is no small feat for a director who made acclaimed films for over 40 years that widely influenced contemporary Western film. Paste Magazine ranked Yojimbo as Kurosawa’s third best film behind Ikiru and Seven Samurai. Yojimbo also featured in the BFI’s recent rundown of Kurosawa’s ten essential films. 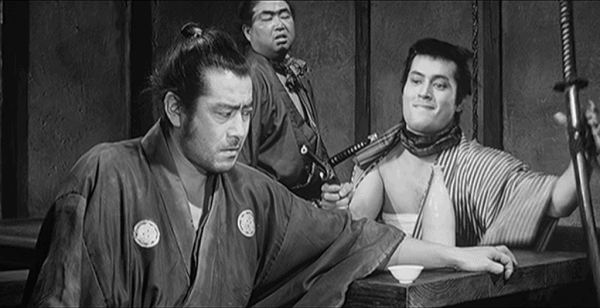 The film’s legacy will perhaps be ever-associated with its influence on Sergio Leone’s A Fistful of Dollars which formed the opening entry in the legendary Dollars trilogy. Having re-watched Leone’s film after Yojimbo it is not hard to see the similarities between the two and at points dialogue and story points could have been lifted beat for beat from Kurosawa’s movie. As with Kurosawa’s film, A Fistful of Dollars follows a lone gunslinger played of course by Clint Eastwood in his first major film role.

There was a lot of debate surrounding the level of influence whether direct or indirect that Yojimbo had on Leone’s film with Yojimbo itself taking influence from John Ford westerns including My Darling Clementine and George Stevens’ Shane. Leone claimed that both films had drawn influence from other sources and so disputed that his film was a direct rip off Kurosawa’s work, nevertheless Leone paid the eventual lawsuit, reportedly costing 15% of A Fistful of Dollars’ worldwide receipts.

This is not to say that A Fistful of Dollars is not a remarkable film in its own right but it is a tangible shame that these two brilliant films from the 1960s will be associated together. 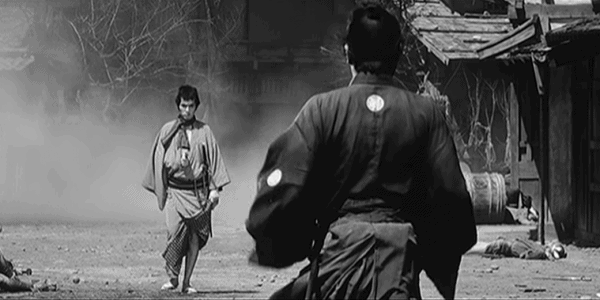 Yojimbo’s minimalism is one of its biggest strengths with the bulk of the action taking place within the confines of a small village in 19th Century Japan. Mifune’s Sanjuro acts mostly as a broker between two warring factions within the village, offsetting the groups against each other. As one would expect from a Kurosawa Samurai film the action delivers and is used sparingly with events given room to pause while our hero drains his sake. There is also a level of dark humour found here with Mifune excelling at showing Sanjuro’s world weariness and wandering nature, making him a distinct figure that is not quite cut from the same cloth as traditional heroes might be.

This film and its sequel from just a year later Sanjuro act in tandem as one of the greatest adverts for Mifune’s talents and the levels of understanding between star and director. Many of Mifune’s other collaborations with Kurosawa like Seven Samurai were ensemble affairs and here he is placed well and truly front and centre dominating proceedings throughout.

One of the other aspects that separates Yojimbo and Sanjuro from some of Kurosawa’s other Samurai tales is the period depicted, with the two films depicting the last days of the Samurai with some antagonists wielding more modern weaponry like pistols. Seven Samurai’s events take place around 300 years prior with Rashomon set even further back in the 8th Century. 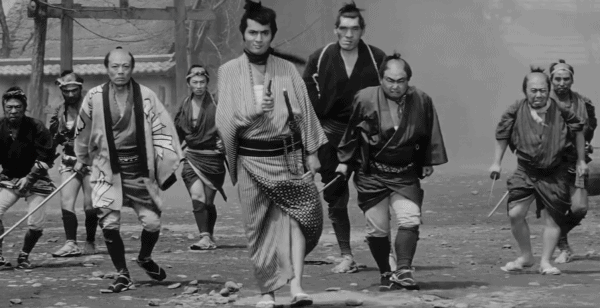 As Yojimbo reaches its 60th anniversary its legacy and impact show no signs of dampening as more fans of world and particularly Japanese cinema engage with this most influential of directors, and Yojimbo and Sanjuro offer a minimalist and intriguing insight into of Akira Kurosawa. Less grandeur in scale than say Seven Samurai this is by no means to discredit the films which wonderfully employ their shorter lengths and act as a fantastic showcase for Toshiro Mifune and Japan in the 19th Century.