A good film score can elevate the picture and manipulate the viewer. It can illicit excitement, fear, intrigue, melancholy and more. It’s not uncommon for a film score to become just as legendary an aspect of a particular film as anything else, or to become thoroughly iconic. Thinking of James Bond might bring to mind certain iconic themes, or the thought of Darth Vader might trigger your ear worm to play the imperial march. Whatever the case, I’ve always been a big fan of film scores. With regularity I’ll listen to them whilst writing. As a film studio, Cannon films were a contentious studio with a perplexing output that at once seemed cheap and tacky, and also sometimes grandiose and ambitious. For an indie studio they couldn’t quite compete with the kind of money Spielberg at al were pummeling into pictures, but they saw their expenditure and ambitions rising to the point of collapse (all whilst simultaneously making cheap ninja movies, or schlock horrors). There has never, for better or worse (mostly better) been another studio quite so eclectic as Cannon.

Among many a gem of a movie, also lurks an array of great soundtracks and scores. Cannon were at their pinnacle through the mid-80’s, meaning many soundtracks were packed with great music, so listing full soundtracks would take a 10 piece, 50,000 word article. I’ll stick to the musical scores at this point and try to stay concise (though I could still do the 10/50,000 special). Here are some essential Cannon Films scores… The Van Damme star maker. Bloodsport remains a classic in the martial arts genre. It’s second only to Enter The Dragon as the definitive tournament fighter flick. It marked one of two iconic breakouts in fact for Van Damme. The other being Kickboxer (not Cannon, though distributed by them in some territories). The common ground? Paul Hertzog. He provided great synth scores on both. There’s a stylistic overlap with some similar tracks, and some particular favourites from both films, but Bloodsport got in there first and his work here remains the most iconic (supplemented well by a cheesily brilliant 80’s soundtrack). Hertzog’s atmospheric tracks were ahead of their time, particularly now we come to an era where the 80’s style synth score has made something of a comeback. Invasion USA almost…ALMOST…pips Lifeforce to the grand title of most ludicrous film ever. It’s a jingoistic wet dream of American machismo and patriotism slap bang during the cold war era. Richard Lynch is atypically brilliant as one of cinemas most unapologetically horrible villains (a Russian villain of course). Everything in this film, even down to how stoic and intense Chuck Norris’ lone wolf badass is, is dialled up to 11 and Jay Chattaway’s score is no different. It thunders large when it needs too, booms with heavy basses when we need to feel dread, and doesn’t particularly do quiet contemplation because it doesn’t need to. Chattaway was something of an underrated composer in 80’s action, composing two of the Missing In Action franchise, two Maniac Cop films and Red Scorpion.

Masters of The Universe (Bill Conti) Whilst Frank Langella storms the sets and chews scenery like he’s performing Shakespeare on stage as Skeletor, and Dolph struts his mighty physique around in a film blessed with an excellent crew (many from Star Wars and films of that ilk) one particularly memorable element of the much loved, youth defining film (as much as it might have been maligned in some corners) is the score from Bill Conti. Whilst it certainly riffs Star Wars and Close Encounters of The Third Kind, it never feels too much like a John Williams bit. It feels like its own beast. There are so many great moments throughout the score, whether the grandiose battles, Skeletor’s recurring themes, or the more reflective moments. Of all the Cannon scores, this is probably the one I listen to the most, as indeed the film was the most seminal for me, not just of Cannon canon, but probably the film which really ignited my love of cinema more than any other. I used to love this film and its sequel as a kid. To me any Indiana Jones knockoff was a rollicking good time. This may well be one of the better, but in retrospect falls short in some regards. That being said, whilst it’s not as exceptional or iconic as John Williams’ work in Indy (what is though?), Jerry Goldsmith delivers a fantastic score for this. It’s Jerry Goldsmith after all. There are some shades of the same kind of bygone adventure B movies that Williams also riffed in Indy, as well as very distinct Goldsmith-isms too. It’s a great listen and honestly, the music is the biggest strength of the film. This might well be Cannon’s greatest film. It’s right up there and it’s got the Oscar cred to prove it, with Jon Voight and Eric Roberts both picking up acting nods. The film almost has to fight a certain Cannon stigma to be recognised to the level it probably deserves and it’s one of the best action thrillers of the decade. The music is atmospheric and effective. It’s very much of it’s time with some jazz funky infusions in places. The pace of the tracks and percussive rhythms, perhaps not surprisingly give the effect of a relentless train. It’s all chuga-chuga-chuga-rata-tata-chuga-chuga. Combined with great editing, thrilling photography and a stark backdrop it certainly boosts the set pieces. They’re tension personified. Jones still knows when to take his foot off the gas and be reflective too. Right, I’m cheating here. So the film was made by Thorn Emi, a one time subsidiary of Cannon (who brought the company around the time they made Highlander, and sold it not too long after). It was released by Cannon in some territories too. Cannon purists will, with a groaning sigh, reaffirm (as if it’s been ad infinitum) that this isn’t really Cannon. Let me tell you peeps. If this film had won an Oscar, the Go Go Boys would have stamped ownership into it well and truly. Cannon came up on my video cassette and Michael Kamen’s score is too good not to acknowledge. As much as Queen became so synonymous with the soundscape of Highlander, Kamen’s work is also superb. His main themes and score throughout are proper, Oscar worthy majesty and yet, the film’s score isn’t often acknowledged enough. I’m cheating again for the exact reasons above. Mark Isham’s music is one element in a film that is in many ways much like Highlander. It’s so visually assured and so oddly unique. It’s of its time and it has this distinct magic that make it special. Both films look glorious, have iconic villains and in addition, great music. The Hitcher certainly opts for more low key given it strikes more firmly in a realm between thriller and horror. Isham’s quiet, contemplative and atmospheric score is perfectly understated as a backdrop to a film that looks like a Coen and Deakins collaboration. In the 80’s I watched four Lou Ferrigno fantasy starring vehicles from Cannon. I thought they were all thoroughly amazing. When I looked back in my late teens, suddenly I see the seams. I saw the cheapness, the bad dubbing, and the fact Lou doesn’t fight a bear, but a man in a really shit bear costume. Then a few years after that I saw new charms. They’re bad, but endearingly bad. That said, Pino Donnagio’s soundtrack in Hercules is pretty great, a very 80’s score which blends electric synths with orchestral majesty. It’s very Vangelis. Donnagio of course had a good background as a favoured composer (to that point) of Brian De Palma. The other Ferrigno classics also had some nice music too, particularly Dov Seltzer’s score in Sinbad which is kind of treading the border of brilliant/awful. Perhaps no film within the lineage has so perfectly represented Cannon as Lifeforce. There’s rarely been such a heady mix of good/bad, cringe worthy, brilliant, barmy, excessive, majestic, cheap, and lavish as this film. It’s absolutely ludicrous but it’s also fantastic. The greatest visual effect and most memorable aspect of the film is Mathilda May (almost every Cannonite’s fantasy girl circa mid 80’s). Her performance is chilling. Sorry I mean chilly…very chilly. I mean they shot it the UK from late winter to spring, at night and she’s in the nuddy for 90% of the film. That, and some great effects aside (mixed with some not so great), Lifeforce is also blessed with a brilliant Henry Mancini score. Even if you haven’t seen the film (why? why would you not?), you’ve probably heard the theme track appear on trailers or TV at some point. Is the music almost too good for this kind of film? The more snobbish of critic might deem so, but like I say, Lifeforce deserves all its exceptional points as well as its trashy elements. The film has an enigmatic lifeforce all of its own. Mancini’s score is full of epic notes, plenty of bombast and throughout the film really keeps the pace going. 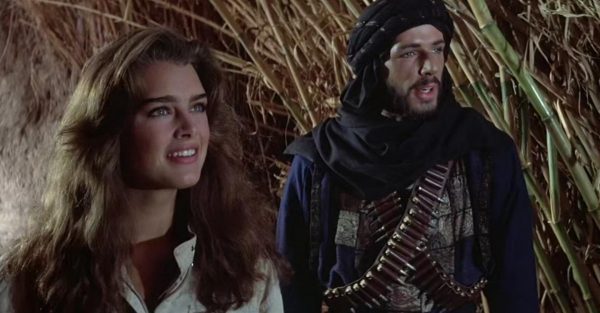 A Brooke Shields star vehicle that marked one of Cannon’s first grand attempts at epic cinema. A feisty female posing as a man to take part in a dangerous cross Sahara car race, but gets kidnapped along the way. It was a critical and commercial bomb but has almost begun finding some reappraisal in the years since. That being said, it was always blessed in one department…the music. Ennio Morricone delivers some wonderful melodies with plenty of grandeur but beautiful harmonies in addition. Music befitting of a better epic, but certainly well worth a listen. The film all told, isn’t too bad either.

What is your favourite Cannon Films score? Lets us know on our social channels @flickeringmyth…