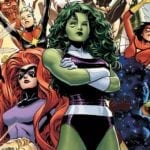 Having been home to Marvel’s first ever female-led project in Agent Carter, Deadline is reporting that ABC has now enlisted Wonder Woman screenwriter Allan Heinberg to develop a new Marvel series for the network which will focus on a team of female superheroes. In addition to writing, Heinberg will executive produce the potential series with […]