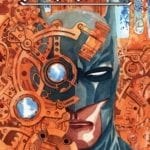 Ricky Church reviews Batman: Gates of Gotham Deluxe Edition… One of the most memorable points of Batman’s long publication history was Dick Gratson’s, aka Nightwing, donning of the cape and cowl in the years Bruce Wayne was thought to be dead. Even after his return, Dick continued to act as Batman in Gotham City while […]