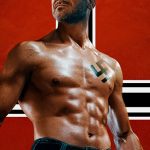 Epic Pictures has released a poster and trailer for the upcoming action thriller Tainted. Written and directed by Brent Cote, the film stars Alan Van Sprang as Lance, a reformed neo-Nazi on a path of redemption after being released from jail; take a look here… A reformed Aryan brotherhood member, Lance, is released from jail […]