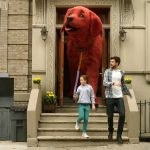 Paramount Pictures clearly feel that Clifford The Big Red Dog has been a ‘good boy’ since his day-and-date release in theatres and on Paramount+ this November, because they’re starting work on sequel to the eOne family film. Despite the fact we called it “a brown stinker” in our ★★ review, Clifford has grossed $34.6M at the […]