With production on the sixth season now underway in Austin, Texas, AMC has announced that Mo Collins and Colby Hollman have been upped to series regulars on Fear the Walking Dead, while Zoe Colletti (A Boy Called Christmas) has been cast in a pivotal new role which will unfurl as the season progresses. Collins, who […] 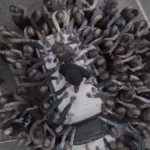 With Fear the Walking Dead season 5 now on a short break until August 11th after this Sunday’s episode, a trailer was released for the second half of this season during today’s Hall H panel at San Diego Comic-Con International, and it has now made its way online; watch it here… SEE ALSO: The Walking […]