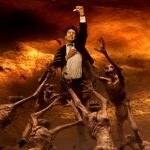 Having made no secret of their desire to reunite for a sequel to the 2005 supernatural thriller over the past few years, star Keanu Reeves and director Francis Lawrence have got their wish as Warner Bros. has given the go ahead to a Constantine sequel. Deadline broke the news, revealing that Reeves is officially on […]