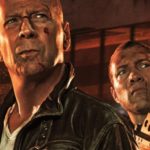 Back in 2015 it was announced that Len Wiseman (Underworld) would be “reinventing” Die Hard with a sixth instalment in the Bruce Willis-headlined action series. Although we’ve heard very little in the way of movement since, it seems that Die Hard 6 still remains a priority for 20th Century Fox as The Tracking Board is reporting […]

Anghus Houvouras with this week’s disappointments from the entertainment world… “Fox denies rumour that Fantastic Four rights are back at Marvel, still planning sequel” Oh thank God. I was worried it would wind up in competent hands. I can’t imagine anyone who thinks this is a good idea, except executives at Fox who seem to […]

It looks like Bruce Willis could be back for a sixth outing as John McClane, although this time he may not be getting in on much of the action himself. According to Deadline, director Len Wiseman (Underworld) and producer Lorenzo di Bonaventura (Transformers) are making a deal with Fox to reinvent the action series with […]