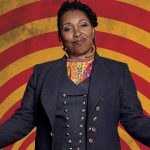 Titan Comics has announced that the Fugitive Doctor is set to make her comic book debut with the launch of a four-issue miniseries entitled Doctor Who Origins from writer Jody Houser and artist Roberta Ingranata, which will be preceded by a lead-in story in Titan’s Free Comic Book Day Doctor Who #1 special. FCBD 2022 […]