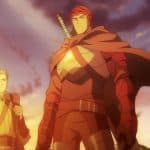 Netflix has released an announcement teaser for DOTA: Dragon’s Blood, a new eight-episode anime from Studio MIR (The Legend of Korra, Voltron: Legendary Defender), which is based upon the hugely popular video game franchise from Valve. DOTA: Dragon’s Blood follows Davion, “a renowned Dragon Knight devoted to wiping the scourge from the face of the […]