Elf, 2003. Directed by Jon Favreau. Starring: Will Ferrell, James Caan, Zooey Deschanel, Mary Steenburgen, Edward Asner, and Bob Newhart. SYNOPSIS: The modern holiday classic Elf arrives on 4K with image quality that’s greatly improved over the 2008 Blu-ray, which is included too. No new extras were commissioned for this edition, but Warner Bros. ported […] M.O.M (Mothers Of Monsters), 2020. Directed by Tucia Lyman. Starring Melinda Page Hamilton, Bailey Edwards, Julian de la Celle, Janet Ulrich Brooks, and Edward Asner. SYNOPSIS: A distraught mother suspects her teenage son is plotting a school shooting, but when he slips through the cracks of the system, she is forced to take matters into […] M.O.M. (Mothers of Monsters), 2020. Directed by Tucia Lyman. Starring Melinda Page Hamilton, Bailey Edwards, Janet Ulrich Brooks, and Edward Asner. SYNOPSIS: A mother suspects her son of being a psychopath and to prevent him from committing a terrible atrocity, takes matters into her own hands. I can imagine that many parents share the same […] Netflix has released the first trailer and a batch of images from the dark comedy Dead to Me, ahead of its arrival on the streaming service next month. The series sees Christina Applegate and Linda Cardellini leading a cast that also includes James Marsden, Edward Asner, Max Jenkins, Sam McCarthy, and Luke Roessler; take a […] 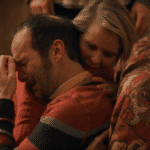 Ahead of its world premiere at the Edinburgh International Film Festival next month, the first trailer has debuted for the upcoming drama The Parting Glass. The film marks the feature directorial debut for Stephen Moyer and is written by Denis O’Hare who also stars alongside Anna Paquin, Melissa Leo, Cynthia Nixon, Rhys Ifans, and Edward Asner; watch […]