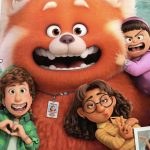 Disney+ has released another poster for Pixar’s animated fantasy comedy Turning Red, along a music video for the original song “Nobody Like U” which is written by Grammy-winning singer-songwriters Billie Eilish and Finneas, and performed by the movie’s fictional boy band 4*Town; check them out here… Disney and Pixar’s Turning Red introduces Mei Lee (voice […]