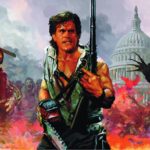 Following the release of the long-awaited slasher crossover Freddy vs. Jason in 2003, fans were left salivating over the possibility of potential sequels adding ever more horror icons into the mix. Sadly, this never materialised, but Bloody Disgusting has got its hands on an internal memo from 2003 which shows that while New Line did […]

Shortly after the box office success of Freddy vs. Jason, rumours started to fly that a sequel could feature the famed Deadite hunter Ash from the Evil Dead series. Jeff Katz even wrote a treatment for the movie which eventually became the comic book series Freddy vs. Jason vs. Ash, but the film never materialised. […]