Tom Jolliffe looks at 13 underrated franchise horror sequels that deserve more love… Franchise horror rule of thumb generally goes like this: the first film is a trailblazing classic. The sequels increasingly diminish in quality. Some franchises might well have die hard fans, but it can often be the case that those classic originals such […] 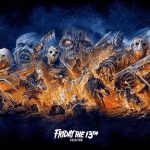 Shout Factory has announced an exclusive box set release of the long-running slasher franchise Friday the 13th which includes all twelve movies from the series including Freddy vs. Jason and the 2009 reboot, and is packed with a host of killer special features including brand new promotional material; check out the details below… SEE ALSO: […] The iconic movie slasher Freddy Krueger is getting a radical new interpretation as part of Kotobukiya’s Bishoujo Series with a new collectible statue set for release in Q3 2019; the statue is available to pre-order now from Sideshow Collectibles, priced $74.99; check out the official promotional images here… SEE ALSO: Harley Quinn and Wonder Girl join […]

GRUMPY UNCLE After sharing our first look at Zazie Beetz as Domino last week, Ryan Reynolds took to Twitter to reveal the first image of Josh Brolin as Cable in Deadpool 2. Check him out here. CANCELLED BOUT Although it drew the biggest box office for both characters, many fans felt let down by 2003’s […] After teasing audiences in the final shot of 1993’s Jason Goes to Hell: The Final Friday, audiences would have to wait a decade before the two horror icons Freddy Krueger and Jason Voorhees traded blows in Freddy vs. Jason. However, the slasher crossover almost happened five years earlier, with Rob Bottin attached to direct an […]

Shortly after the box office success of Freddy vs. Jason, rumours started to fly that a sequel could feature the famed Deadite hunter Ash from the Evil Dead series. Jeff Katz even wrote a treatment for the movie which eventually became the comic book series Freddy vs. Jason vs. Ash, but the film never materialised. […]