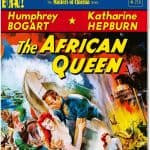 In celebration of the film’s 70 year anniversary, Eureka Entertainment has reissued The African Queen, John Huston’s heartfelt and thrilling romantic adventure starring Humphrey Bogart and Katharine Hepburn, on Blu-ray in the UK, and we have three copies to give away! Read on for details of how to enter… Three movie giants come together in […]