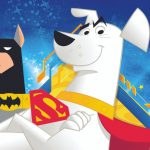 Warner Bros. Home Entertainment has announced that Krypto the Superdog: The Complete Series will arrive on DVD this August, collecting all 39 episodes of the 2005-2006 animated series which followed Superman’s Kryptonian canine companion as he battled the forces of evil on Earth. Check out the cover artwork and details below… In 2005, a new […]