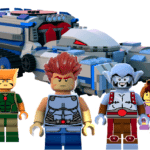 After reaching 10,000 supporters with his Iron Giant concept last year, Brett Cuviello is back with another LEGO Ideas project, and one that’s sure to be appealing to fans of the classic 1980s cartoon ThunderCats! Brett’s ThunderCats project includes the ThunderCats’ iconic ThunderTank vehicle, consisting of around 830 pieces, with flick missiles, stud shooters, a […] 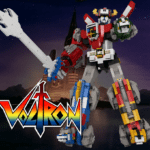 The LEGO Group has announced the winners of the LEGO Ideas Third 2016 Review stage, with JakeSadovich77’s Ship in a Bottle, The Flagship Leviathan and len_d699’s Voltron – Defender of the Universe both selected to be made into official LEGO sets. Here’s the video from LEGO announcing the results… SEE ALSO: Follow all of our LEGO coverage here Development […]

Two more LEGO Ideas concepts have achieved the necessary 10,000 supporters to progress onto the First 2017 Review Stage in the hope of being manufactured as an official LEGO set. First up from Bruce Lowell is a Mighty Morphin Powers Rangers set, which features Zordon’s command centre along with the original six Rangers Billy, Jason, […]

LEGO Ideas user SpacySmoke is looking to bring back the fun of the arcade with his project SEGA Classic Arcade Machines, and the concept has taken a major step towards becoming a reality after achieving the required 10,000 supporters to progress to the Review Stage! The project features three classic SEGA arcade cabinets in Space […]

Designer Psyence’s LEGO Star Wars Ultimate Collectors Series Landspeeder set has become the latest LEGO Ideas concept to achieve the necessary 10,000 supporters to progress to the Second 2016 Review Stage as it hopes to become an official set. The build is based upon Luke Skywalker’s vehicle from Star Wars: Episode IV – A New […]