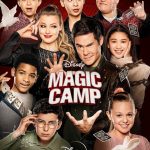 Disney+ has released a poster and trailer for Magic Camp, ahead of its arrival on the streaming service this coming Friday. Directed by Mark Waters, the comedy stars Adam Devine as a down-on-his-luck magician who rediscovers his passion for magic with the help of a group of misfit campers; check them out here… A group […]

Coinciding with the announcement of release dates for Lucasfilm’s Star Wars: Episode IX and Indiana Jones 5, Disney has now officially set dates for a number of its upcoming projects, including Frozen 2 and Jon Favreau’s The Lion King. Frozen 2, the sequel to the studio’s highest-grossing animated release of all-time, is set to hit […]

Casting is underway on Walt Disney Pictures’ Magic Camp, with Variety reporting that Adam DeVine (Mike and Dave Need Wedding Dates) and Jeffrey Tambor (Transparent) have joined the family comedy, which is being directed by Mean Girls helmer Mark Waters. Magic Camp “follows DeVine’s character who is pulled out of retirement by his former mentor […]

According to The Tracking Board, director Mark Waters (Mean Girls) has signed on to direct Disney’s long-gestating live-action family comedy Magic Camp, which has Steve Martin attached to star. The site reports that Magic Camp “follows a rigid and cautious banker who returns to the summer camp he attended as a boy: a camp for […]