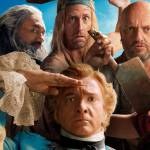 HBO Max has released a new trailer and poster for the upcoming pirate comedy Our Flag Means Death. Loosely based on the adventures of the 18th century would-be pirate Stede Bonnet, the series follows Captain Bonnet (Rhys Darby) as he struggles to earn the respect of his crew and survive life on the high seas […]