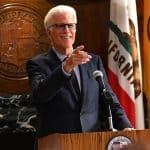 With just a week to go until its season premiere, NBC has released a trailer for the upcoming comedy series Mr. Mayor which stars Ted Danson as a retired wealthy businessman who runs for mayor of Los Angeles in an attempt to impress his teenage daughter. Joining Danson in the cast are Holly Hunter, Vella […]