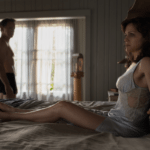 Ahead of its world premiere at Fantastic Fest later this month, Netflix has debuted the first trailer for the upcoming adaptation of Stephen King’s 1992 novel Gerald’s Game. Directed by Mike Flanagan (Oculus, Ouija: Origin of Evil), the thriller stars Carla Gugino, Bruce Greenwood, and Chiara Aurelia; watch it below… While trying to spice up […]

Streaming giants Netflix has tapped filmmaker Mike Flanagan (Hush, Oculus, Ouija: Origin of Evil) to write, direct and produce a ten episode of Shirley Jackson’s 1959 novel The Haunting of Hill House, Deadline is reporting. The project – titled Haunting – is being produced by Paramount TV and Steven Spielberg’s Amblin TV and has received […]

Back in September of last year it was announced that Netflix had given the go ahead to an adaptation of Stephen King’s 1992 novel Gerald’s Game from director Mike Flanagan (Oculus, Ouija: Origin of Evil), and now King has revealed on Twitter that he’s seen a rough cut of the film, and “it’s gonna freak […]

Ouija: Origin of Evil and Hush director Mike Flanagan has signed on to direct Inherit the Earth for Sony Pictures and Platinum Dunes. Flanagan takes over from director Andrew Adamson, who exited the sci-fi project earlier this year, and will also provide a rewrite of the original script. Inherit the Earth follows a servant robot […]

Last month director Mike Flanagan (Oculus, Ouija: Origin of Evil) revealed that his long-gestating Stephen King adaptation Gerald’s Game is moving forward at Netflix, and now we have details on the film’s cast. Deadline is reporting that Carla Gugino (Wayward Pines) and Bruce Greenwood (Star Trek) are set to star as Jessie and Gerald Burlingame, with […]

A trailer has arrived online for director Mike Flanagan’s supernatural thriller Before I Wake which sees Room’s Jacob Tremblay alongside Kate Bosworth (Superman Returns) and Thomas Jane (The Punisher); watch it below after the official synopsis… In this intense and heart-pounding supernatural thriller, Jessie (Kate Bosworth) and Mark (Thomas Jane) decide to take in a sweet and loving […]

Coinciding with its world premiere at the SXSW Film Festival this weekend, the first trailer has arrived online for writer-director Mike Flanagan’s upcoming home invasion thriller Hush; check it out below after the official synopsis… In this heart-pounding thriller from acclaimed writer and director Mike Flanagan (Oculus, Before I Wake), silence takes on a terrifying […]

Actress Elizabeth Reaser (The Good Wife, True Detective) has joined the cast of the upcoming horror sequel Ouija 2, reports Deadline. The first film, released in 2014, grossed over $102.5 million worldwide from a small $5 million budget and was another big hit for producer Jason Blum and his Blumhouse Pictures (The Purge, Paranormal Activity). […]

The Hollywood Reporter has revealed that Oculus director Mike Flanagan is set to direct the upcoming teen horror sequel Ouija 2. Flanagan had previously signed on to co-write the script for the film with Jeff Howard. Furthermore, the sequel will see Flanagan reuniting with actress Annalise Basso, who starred in Oculus as the younger version […]

Relativity Studios has released a trailer for director Mike Flanagan’s supernatural thriller Before I Wake starring Kate Bosworth and Thomas Jane, and you can check it out below after the official synopsis… In this intense and heart pounding supernatural thriller, Jessie (Kate Bosworth) and Mark (Thomas Jane) decide to take in a sweet and loving […]