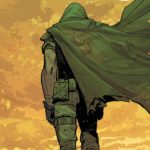 Skybound Entertainment and Universal Pictures are teaming up for an adaptation of the sci-fi drama comic book series Oblivion Song from The Walking Dead creator Robert Kirkman and artist Lorenzo De Felici. Oblivion Song takes place a decade after 300,000 citizens of Philadelphia were suddenly lost in Oblivion. The government made every attempt to recover […]