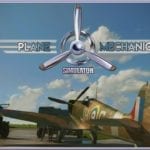 Despite a short delay to provide a bit of polishing up, developer Disaster Studio has announced the release of Plane Mechanic Simulator on Steam Early Access.  This new sim will take engineers back to World War 2 to tinker with some war winning fighter aircraft.  Watch the new launch trailer below to get a more detailed look […]