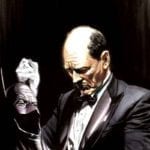 Earlier this week it was announced that Epix has cast Jack Bannon (The Imitation Game) and Ben Aldridge (Fleabag) as Alfred Pennyworth and Thomas Wayne in its upcoming Batman prequel series Pennyworth, and now TV Line brings word of two more additions to the cast of the show. The site reports that Ryan Fletcher (Outlander) and […]