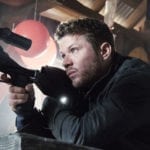 The Ryan Phillippe-led drama series Shooter has been cancelled by USA Network, with the show set to draw to a close with season three’s finale in September. Shooter, based upon the 2007 Mark Wahlberg movie and Stephen Hunter’s Point of Impact novel, premiered back in October 2016, having been pushed back on several occasions due […]

The Shooter TV series has just been renewed for a second season on USA Network. The series is an adaptation of Stephen Hunter’s novel Point Impact and the 2007 Mark Wahlberg film Shooter, and stars Ryan Phillippe as Bob Lee Swagger, a former Marine sniper framed for an assassination attempt on the President’s life. Shooter was supposed to air in the […]

With just five days to go until its season premiere, the USA Network has released a promo for the upcoming action thriller series Shooter featuring Ryan Phillippe and Randy Orton; take a look below… SHOOTER is an uncompromising exploration of the definition and evolution of a hero. Ryan Phillippe (“Secrets and Lies”) is a producer on […]

We saw a trailer earlier this month [watch it here], and now a new promo has arrived online for the USA Network’s upcoming action thriller series Shooter. Starring Ryan Phillippe and Omar Epps, the show is based on Stephen Hunter’s best-selling novel Point of Impact and the 2007 film with Mark Wahlberg, who executive produces; take a […]

The USA Network has debuted the first trailer for its upcoming action thriller series Shooter, which is based on Stephen Hunter’s best-selling novel Point of Impact and the 2007 Mark Wahlberg film, and stars Ryan Phillippe and Omar Epps. Check it out here… SHOOTER is an uncompromising exploration of the definition and evolution of a hero. Ryan […]

The USA Network has given a series pickup to Shooter, a small screen adaptation of Stephen Hunter’s novel Point of Impact and the subsequent 2007 action thriller, which sees Ryan Phillippe taking over the role of marksman Bob Lee Swagger, played by Mark Wahlberg in the movie. Wahlberg remains involved as executive producer alongside John […]

Remember Ryan Phillippe, one of the “hottest” young actors in Hollywood in the late 1990s, who starred in Cruel Intentions? Well, he is back, and has nabbed the lead in Shooter, a TV pilot for USA network based on the 2007 actioner starring Mark Wahlberg, reports Variety. Wahlberg is still involved with the small screen […]