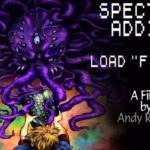 Back at the end of September we reviewed Memoirs of a Spectrum Addict from Andy Remic.  A documentary feature film based on Andy Remic’s memoirs growing up with the ZX Spectrum; part cinema drama, part interviews, part nostalgic journey.  We awarded the documentary 4 out of 5 stars saying of it, “If you lived in […]