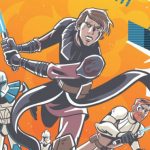 It’s not just Disney+ that will be exploring the conflict between the Republic and the Separatists with next month’s seventh and final season of the fan favourite animated series Star Wars: The Clone Wars, as IDW Publishing has announced the upcoming launch of the five-issue weekly comic book event Star Wars Adventures: The Clone Wars […]