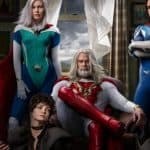 While the word ‘cancelled’ was not used, Netflix’s Jupiter’s Legacy effectively is as Deadline and Jupiter’s Legacy creator Mark Millar announced the cast was being released from their contracts as Netflix is shifting its focus onto Supercrooks, another Millerworld property. Jupiter’s Legacy is based off the comic series by Millar and artist Frank Quietly. It starred Josh Duhamel, Leslie Bibb, […]