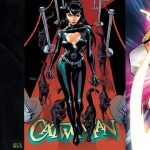 DC Comics has announced that it will pay tribute to legendary comic book creator Stan Lee this December with the release of Tales from Earth-6: A Celebration of Stan Lee, a one-shot anthology featuring new stories based on Lee and Michael E. Uslan’s interpretations of DC characters from his Just Imagine one-shots from 2001 and […]