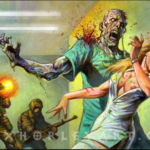 Back in 2009, after he’d finished up with his Halloween remake, it was reported that musician-turned-filmmaker Rob Zombie would be turning his attention to another classic horror, signing on to direct a remake of 1958’s The Blob (which was itself remade in 1988). The movie never came to fruition, but now thanks to artist Alex Horley (via […]

Following on from last week’s report that Halle Berry is wanted for a role in The Blob, Bloody Disgusting has now got its hands on the early sales art poster for the sci-fi horror remake; check them out here… When a band of miners uncover something hidden deep beneath the earth they unwittingly unleash a […]

It’s been a long time since we’ve heard word on the planned remake of the 1958 sci-fi cult classic The Blob, but now it seems that we may have a new addition to the cast, with Bloody Disgusting reporting that Halle Berry is attached to star in the long-gestating remake. In January of 2015, it […]

The Hollywood Reporter has broke the news that Samuel L. Jackson is set to join the cast of The Blob, the new remake of the 1958 sci-fi classic which featured Steve McQueen. Simon West (Con Air) is directing the new version, which would see Jackson play a bio-chemistry professor who tries desperately to stop the […]

It was revealed last month that Simon West (Con Air) would be taking on the next big screen remake of The Blob, which he looks to get underway once the promotional tour for Wild Card is out of the way. He’s also got plans to take his version away from previous attempts. “[It] takes a […]

The Blob freaked people out in 1958 as it moved through town devouring everything that crossed its path. I know, sounds scary doesn’t it? Now it’s back to do it all again in a remake of the old sci-fi classic, set to be helmed by The Expendables 2 director Simon West. West should prove to […]