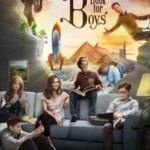 Amazon Prime Video has revealed the first trailer and poster for its upcoming comedy drama series The Dangerous Book for Boys, along with a premiere date reveal of March 30th. Based on Conn and Hal Iggulden’s bestselling book of the same name, the series is produced by Bryan Cranston, Greg Mottola, James Degus, and Michael […]

Following Sneaky Pete and the upcoming anthology series Philip K. Dick’s Electric Dreams, Bryan Cranston has landed another project at Amazon, with the streaming service placing a series order for The Dangerous Book for Boys. Developed by Cranston and Greg Mottola and based upon Conn and Hal Iggulden’s bestselling advice book of the same name, […]