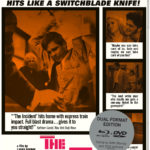 THE INCIDENT, the raw and intense 1967 New York thriller featuring Martin Sheen, Tony Musante and an ensemble cast, makes its worldwide debut on Blu-ray in a Dual Format (Blu-ray & DVD) edition as part of the Eureka Classics range from 12 August 2019, and we have three copies to give away. Read on for […]

The Incident, 2015. Directed by Jane Linfoot. Starring Ruta Gedmintas, Tom Hughes and Tasha Connor. SYNOPSIS: A successful young couple have their lives shattered when they each encounter the same teenage prostitute.  The husband meets her when buying pizzas on the way home from work and money changes hands.  The wife wakes up one night […]