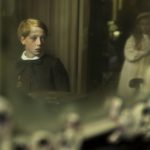 Focus Features has released a first look image for Room director Lenny Abrahamson’s latest film The Little Stranger. Based on Sarah Waters 2009 gothic novel of the same name, the mystery horror stars Domhnall Gleeson, Ruth Wilson, Will Poulter, and Charlotte Rampling; take a look at the image here… THE LITTLE STRANGER tells the story of Dr […]

Focus Features has announced that it has picked up the rights to The Little Stranger, the next film from Room director Lenny Abrahamson, which has been scripted by Lucinda Coxton (The Danish Girl). Described as “a chilling ghost story”, the film will star Domhnall Gleeson (Star Wars: The Last Jedi), Charlotte Rampling (Assassin’s Creed), Ruth […]

After the success of Frank last year, director Lenny Abrahamson has continued his upward momentum with the acclaimed Room, which has been winning awards across the recent festival season. Now he is set to reteam with his one of his Frank stars for The Little Stranger. Baz Bamigboye of The Daily Mail is reporting that […]