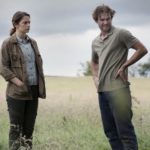 One of the most distinctive and uncompromising voices in British film returns to cinemas this week.  Often described as the natural successor to Ken Loach, Clio Barnard moves from the urban setting of her much-praised The Selfish Giant (2013) to the windswept farming country of the Yorkshire Moors in Dark River.   Based on Rose […]