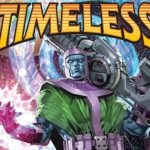 Kang the Conqueror declares war on time itself this week as Marvel offers a sneak peek at the next twelve months of the Marvel Universe with Timeless #1; check out the official preview here ahead of the issue’s release this Wednesday… HOW DO YOU WIN A WAR AGAINST TIME? A special year-ending adventure that gives […] 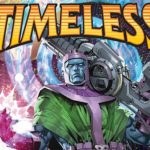 Marvel has announced that it is set to give fans a sneak peek at what’s to come from the Marvel Universe in 2022 with Timeless #1, a one-shot from writer Jed MacKay and artists Kev Walker, Greg Land, and Mark Bagley which promises to offer a first glimpse at major new developments for the X-Men, […] 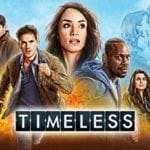 Following the announcement of its cancellation earlier this year, NBC has released a trailer for the two hour finale of its time travel drama series Timeless which airs this coming Thursday; watch it here… SEE ALSO: Timeless series finale plot details “It’s basically the equivalent of two episodes. As a matter of fact, we tried, at […]

Timless fans – mark your calendars, as NBC has announced that the two-part series finale is set to air on Thursday, December 20th between 8pm and 10pm. According to Entertainment Weekly, the finale is described as “an epic, unforgettable thrill ride through the past, present and future, with a healthy dose of Christmas spirit. Spread […]

For the second year in a row, the time travel drama Timeless found itself cancelled this past June, only for NBC to once again offer it a reprieve. However, unlike last year when the show was granted a new season, this time the revival is limited to just two episodes – albeit ones which the […]

It’s not exactly a revival, but fans of Timeless can take some solace from the fact that they are going to receive proper closure, with NBC announcing that it has ordered a two-part finale for the cancelled time-travel series. “While we wish we could’ve made another dozen seasons of Timeless, this is the next best thing,” said […]

For the second year in a row, NBC has cancelled its time-travel series Timeless, although talks are apparently underway with regards to wrapping the show up and the season two finale cliffhanger with a two-hour movie. Timeless was first cancelled last May after the season one finale, but opted to reverse its decision and renew […] 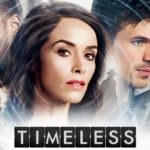 Having received a reprieve from its cancellation after its first season, NBC’s Timeless is set to make its return next month as season two gets underway, and we’ve got three promos for the time-travel drama series which you can watch here… https://www.youtube.com/watch?v=jOMWUNCTnJg From Eric Kripke (“Revolution,” “Supernatural”), Shawn Ryan (“The Shield”) and the producers of […]

Here’s some good news for Timeless fans. After cancelling the show earlier this week, NBC has now had a change of heart and renewed the time-travel drama series for a second season, which will air at some point in 2018. So huge thanks to @nbc for supporting us. And THANKS for the fan support. It's […]

NBC has announced that it has cancelled the time-travel drama series Timeless, pulling the plug on the show after one season. Creators Erik Kripke and Shawn Ryan took to social media to confirm the news, as well as revealing that production company Sony TV is currently looking for another outlet for a second season: Its […]