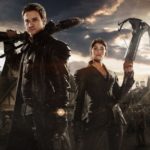 Back in 2015 it was rumoured that Paramount Pictures had scripted its plans for a sequel to Hansel & Gretel: Witch Hunters, and was instead working on bringing the property to the small screen. Well, Tommy Wirkola, director of the original movie, has now confirmed that a TV series is in development, and will feature a […]

With less than three weeks to go until its arrival on Netflix, the streaming service has released a poster and trailer for director Tommy Wirkola’s upcoming sci-fi thriller What Happened to Monday (international title: Seven Sisters) which sees Noomi Rapace taking on seven roles as identical septuplets, and also stars Glenn Close and Willem Dafoe; check them out […]