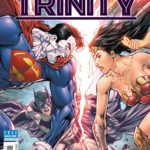 ‘Dark Destiny’ continues this coming Wednesday in DC’s Trinity #14, and we’ve got a preview of the issue for you here; check it out… “DARK DESTINY” part three! The Pandora Pits’ secrets start to be revealed as Superman, Batman and Wonder Woman team with Constantine, Deadman, Zatanna, Red Hood, Artemis and Bizarro to attempt to […] 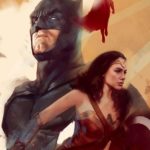 DC Comics has announced that it will be celebrating the upcoming release of the Justice League film with a series of movie variant covers this November, including Trinity, Detective Comics, Aquaman and Justice League; check them out here… UPDATE: And here’s the covers to Action Comics, Superman, The Flash, Wonder Woman, Batman and Cyborg… Fueled […] 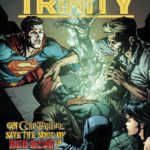 ‘Dark Destinty’ continues in Trinity #13 this Wednesday and we’ve got a preview of the issue for you here; check it out… “DARK DESTINY” part two! The Pandora Pits’ origins reveal themselves to Circe and Ra’s al Ghul as John Constantine and the mystical trinity work with Batman, Superman and Wonder Woman to host a […] 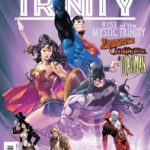 The new story arc ‘Dark Destiny’ gets underway in Trinity #12 today, and we have a preview of the issue for you here courtesy of DC Comics… “DARK DESTINY” part one! Superman, Batman and Wonder Woman must turn to the mystic trinity of Dead Man, Zatanna and John Constantine when Red Hood, Artemis and Bizarro […]

Ricky Church reviews Trinity Vol. 1: Better Together… The Dark Knight. The Man of Steel. The Amazon Warrior. The three greatest heroes in the DC Universe unite when the threats to our planet are bigger than any one of them can handle. But now, the deadly White Mercy has Superman, Wonder Woman and Batman in […]

Ricky Church reviews Trinity Annual #1… You don’t betray Ra’s al Ghul and legendary sorceress Circe and just walk away. That’s what Lex Luthor is about to learn the hard way. Now, he has to unite with his former Justice League teammates if he wants to stay alive. Meanwhile, the Trinity fear this ordeal will […]

Ricky Church reviews Trinity #1… “BETTER TOGETHER” part 1! Together again for the first time! Batman, Superman and Wonder Woman. The core of the World’s Greatest Heroes…but with a new Man of Steel, the bonds these three share will be tested and redefined by super-star writer/artist Francis Manapul. In this premiere issue, see the trio […]

Ricky Church continues his countdown to Batman v Superman: Dawn of Justice with Trinity… Despite the movie being called Batman v Superman, one factor that is just as heavily anticipated, if not more so, than the two heroes going head-to-head in a physical match is the introduction of Wonder Woman. This will be the first […]