Apple TV+ has released a trailer for the second season of the acclaimed comedy series Trying which sees the return of Esther Smith and Rafe Spall as Nikki and Jason, and follows the couple as they continue to navigate the adoption process; watch it here… In the eight-episode second season of “Trying,” Nikki (BAFTA-nominee Esther […] 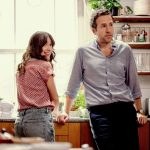 Apple TV+ has released a trailer for the upcoming comedy series Trying which stars Esther Smith and Rafe Spall as a thirty-something couple confronted by bewildering new challenges while trying to adopt a child; watch it here… All Nikki (Esther Smith) and Jason (Rafe Spall) want is a baby—but it’s the one thing they just […]