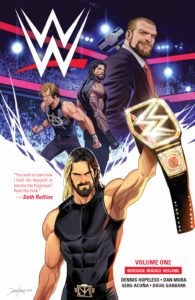 The secret behind the betrayal and destruction of THE SHIELD is revealed here! Why did Seth Rollins join Triple H and turn on his brothers, Roman Reigns and Dean Ambrose? Collects issues #1-4 and the WWE: Then. Now. Forever. special.

Most WWE fans will tell you that purchasing decent wrestling gear can be extremely difficult. A lot of the WWE’s merchandise, T-shirts aside, are aimed at a younger audience and tend to be cringe-worthy and quite simply, not worth investing in. So it gives me great pleasure to tell you that WWE’s graphic novel WWE Vol. 1 breaks that mould, delivering a high quality, and amusing product that will please the vast majority of wrestling fans.

The novel uses the rise and fall of Seth Rollins as its main storyline, beginning with his decision to betray The Shield in 2014, and ending with his return from injury after 9 months out at Money in the Bank 2016. The comic extends on the televised product, adding more depth to the characters by showing them interacting outside the ring in a variety of situations.

It is here where the comic finds its strengths. The stuff we have seen on television is loyally recreated, but it is in the outside segments that the author, Dennis Hopeless, has the most fun. Rollins’ character is well padded out, much more so than his current one on the TV. He has a clear character arc, and is rather surprisingly not just painted as a guy who stabbed his friends in the back, but rather one who is insecure and uncertain – desperate to make a name for himself, but unsure as to how he is going to carve his own path. Hopeless takes one of the most despicable heels in recent WWE history and turns him into a well layered, sympathetic character. His story arc – from snivelling coward, to the ultimate opportunist, to a man desperate to hang on to his top spot – is very well-rounded and made me miss some solid storytelling in a time where WWE have decided to give their main title to Jinder Mahal.

The book is also fairly consistently funny. Dean Ambrose lives up to his lunatic fringe character much better here than he does on TV, and his constant attempts to foil Rollins are highly amusing, as is an ongoing joke throughout the book about potato salad. Reigns is often only on the fringe of things, but that was the case in life as well, as ‘The Big Dog’ was in the process of becoming Vince’s chosen one after The Shield split.

There are some unnecessary parts. The constant reappearance of The New Day seems like an opportunistic chance to further promote their products and some decisions, like the one to retcon Rollins’ Mania curb-stomp into a pedigree feel unnecessary. The novel decides to also miss out on some crucial matches during Rollins’ run – his feud with John Cena that took place over the summer of 2015 is only touched upon briefly.

The artwork from both Dan Mora and Serg Acuna is, for the most part, excellent. Acuna, in particular, manages to capture the feel of a WWE matchup and all the in-ring insanity that can come with it. The artwork really helps bring the characters to life and gives WWE fans a chance to relive one of the more entertaining title runs in recent history. The dialogue, while cheesy, moves things along quite nicely and there are some amusing jokes about wrestlers interacting in the real world.

All in all, WWE Vol. 1 is a hugely entertaining read. As an accompanying piece to a memorable time in recent WWE history, the novel adds a lot to both the storylines and the characters and is likely to entertain the majority of the WWE’s fanbase.