Alex Moreland reviews Doctor Who: Supremacy of the Cybermen… 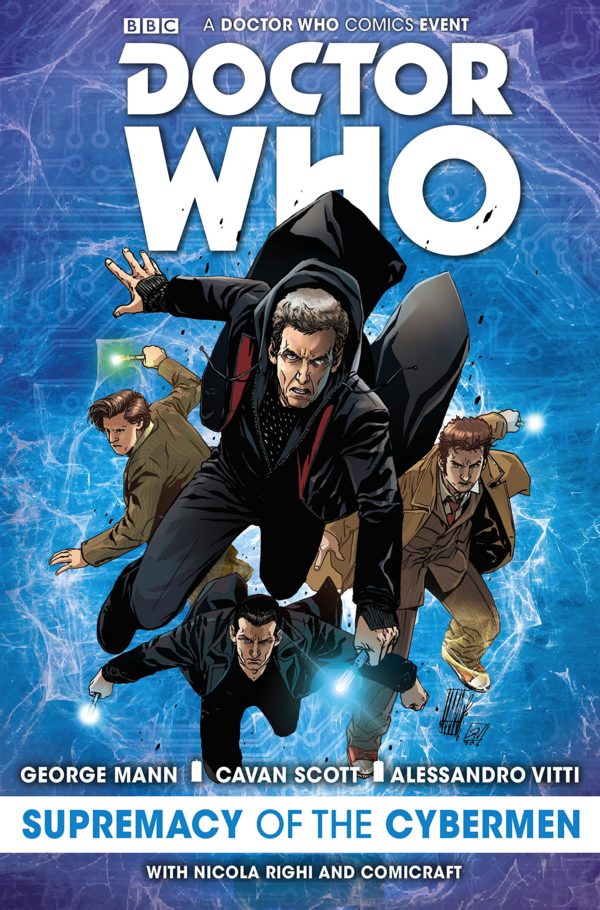 Across its 130 pages, Supremacy of the Cybermen features four Doctors – with the other eight appearing in cameo roles – alongside a host of aliens and enemies such as the Sontarans, Silurians, Sisterhood of Karn, and of course the Time Lords and Cybermen. There’s a feel of an anniversary story to this, an event not dissimilar to The Five Doctors or Day of the Doctor – a whirlwind tour of the programme’s history, full of loving references and nods. Admittedly, it stops short of the full union; Supremacy of the Cybermen features four intertwined plotlines, rather than uniting the Doctors for a final showdown. I’m inclined to say that’s a good thing, really; while it’s true some readers might feel slightly cheated, this style allows each character a little more time to breathe. If nothing else, the incarnations of the Doctor aren’t like the Avengers – they don’t need to team up that often.

Ivan Rodriguez and Walter Geovanni provide impressive artwork throughout, supported by vibrant colours from Nicola Righi and Enrica Eren Angiolini; they help realise the script, keeping the story confident and expansive. There’s a nice style to the art (albeit one that seems to serve every character apart from the Eleventh Doctor well – but then, Matt Smith is hard to draw) with largely impressive design work too. The aforementioned cameo appearances are all nicely realised too, with art that neatly evokes the feeling of the classic era.

Granted, there’s perhaps a value in questioning the merit of this. Supremacy of the Cybermen is, first and foremost, a continuity laden romp. It really is drenched in it – appearances from every Doctor are one thing, but going so far as to reference Looms is quite another. The extent to which the story works on its own terms is debatable; it’s a fairly basic, perfunctory plot, one that serves primarily to set up the monster runaround rather than anything more substantial. Uniting two kinda crap villains – yes, the Cybermen and the Time Lords are a bit rubbish – for a continuity entrenched tale is unlikely to ever be a groundbreaking piece of fiction.

After a while, though, that’s just a case of splitting hairs; a matter of personal taste. Over the past few years, I’ve begun to lose interest in this sort of thing – and that’s just me. But the fact is, there are a lot of people who are going to love this – and it’s definitely very good at being a continuity laden comic.

If the idea of a Time Lord/Cyberman team up with appearances from every Doctor and some popular classic monsters sounds like a great read to you, then this is absolutely worth your time.