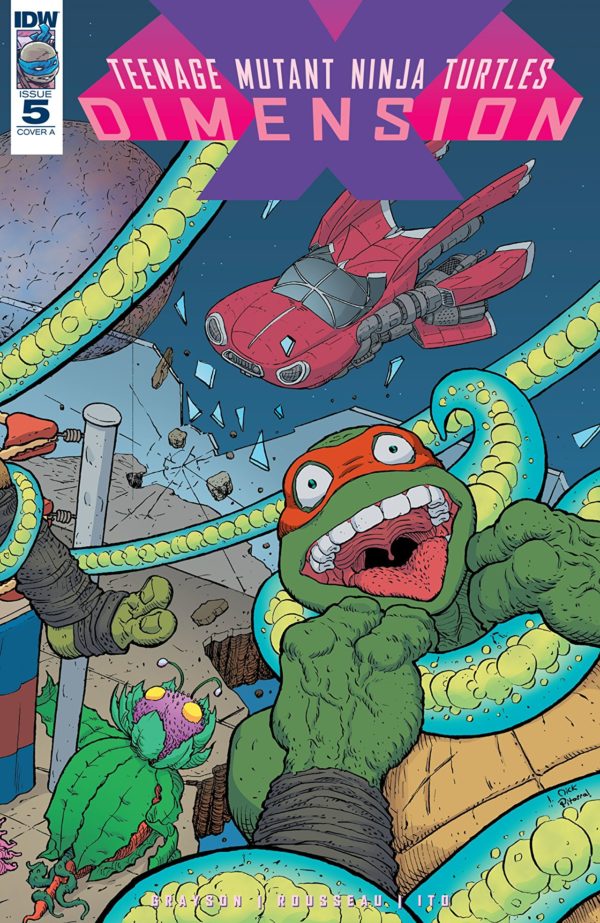 Well now, that was not the ending I expected.

Seriously guys, the Dimension X series has ended in such a way that I don’t know whether it’s brilliant or terrible. Of course I won’t spoil it, but that always ties my hands a fair bit. I’ll hint it a little though; has a bad guy not knowing the whole story ever been the reason they didn’t succeed? The IDW series has been so strong that it can go a different way and try something else when it wants to, but I honestly don’t know if they’ve made the right choice here.

What can I definitely talk about? Well, in a series that has been consistently high in quality when it comes to art, Craig Rousseau also delivers. I particularly like how he’s managed to make the turtle’s eyes so expressive, which is even more impressive when you realise they never have pupils. His design of the latest witness does remind me of grass Pokemon, but it’s much better looking than most grass Pokemon (yes, I’m calling out grass types!).

This issue has thrown me for a loop. But I’ll try to get it together to sum up the series. I think overall it’s been decent; far better than April and Casey (shudders) but not at the level of The Foot Clan. Hakk-R is a great new villain and one I hope to see more of; I’d say he/she (I really don’t know) is the strongest aspect of it overall, even if I’m not sure the writers have always known what’s best to do with him/her. There’s been a liveliness about it and it’s had some fun, which isn’t what I expected about a story of the Turtles gathering war crimes witnesses.