The crew of the colonisation ship Covenant receives a mysterious distress signal leading them to land on a lush and seemingly uninhabited planet. Upon their arrival, however, the crew makes contact with a terrifying and familiar foe that threatens to kill them all. 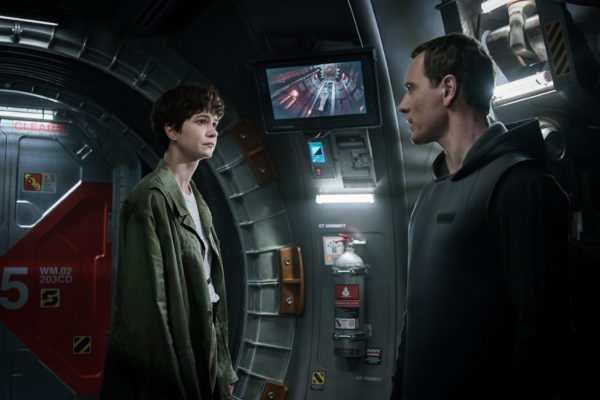 The Alien series has long been one of my favourite film franchises. As my reviews earlier this month show, I absolutely adore the first and second films of the franchise and sincerely believe that they are two of the best horror films ever made. However, the franchise after the first two entered a seemingly perpetual state of decline, with only third and fourth films being the only enjoyable (or even watchable) entries of the franchise’s later entries.

This decline in my view was all but solidified by Ridley Scott’s dull and unnecessary prequel Prometheus, a film that only served to ruin some of the best mysteries of the original film (ie. the Space Jockey) and quite frankly didn’t need to be made.

So with this in mind, you can understand my rather muted reaction to of the release Alien: Covenant, a film which I honestly did not have the highest hopes for and that I believed would be the final nail in the franchise’s coffin.

Thankfully I was wrong. Alien: Covenant not only halts this state of decline, but it also emerges as possibly one of best entries in the long running franchise.

Because this film is still fairly recent and new I’ll preface the rest of the review with this gentle little warning for those who still haven’t seen it.

The thing that in my mind made the original Alien films so popular was not the titular creatures themselves, but it was the character of Ellen Ripley as played by Sigourney Weaver, with the films serving as one long character arc as we saw this previously stuck up “by the book” officer emerge as one of the greatest heroines in film history.

Prometheus lacked a Ripley clone to latch on to, with Noomi Rapace’s Dr. Shaw being a decent but rather expendable protagonist. Alien: Covenant attempts to do the same with Katherine Waterston’s Daniels, a much better character than Shaw and certainly almost a successor to Ripley, but still not quite enough. Although that’s not to say Waterston gives a bad performance, because she’s brilliant in the role, again following a small arc in which she changes from “by the books” officer to gun-toting, Cirque du Soleil style swinging action heroine.

The real successor to Ripley and Weaver as the face of the franchise is fact Michael Fassbender as the android David who has emerged as possibly the most fascinating and complex character that the franchise has had in years.

Fassbender is phenomenal in his performance as David retaining that same charming and sinister edge that he had in Prometheus, adding a much deeper layer of malice and evil that represent the characters growing hatred against the humans who created him.

Fassbender also excels as the much newer android Walter (despite a slightly odd American accent) with this much more mechanical and loyal machine serving as the perfect counterbalance to the evil machinations of his “brother”.

Plus we get to do get the pretty awesome sight of Michael Fassbender beating the crap out of himself.

The film does have some of the Prometheus’ problems when it comes to its supporting characters, with the cast perhaps being a tad too crowded for the viewer to build any kind of serious attachment to. Although, Covenant does manage to give us a few memorable characters such as Danny McBride’s very fun performance as pilot Tennessee who manages to add some comic relief to the film without overdoing it or ruining the tension of a scene.

The pacing of this film is much tighter than its predecessor, striking a fine balance between building suspense and tension in the first half before then hitting the gas and throwing us an exciting action-packed second and third act. This film is also much more violent than Prometheus, with some of the new creatures being gifted with some really horrific “births”. If you thought a chestburster was a nasty way to go, try to imagine it coming out of your mouth.

The film also again touches on some of the themes raised by its predecessor regarding the nature of “creators” and their “creations” with Fassbender’s David and Walter serving as a kind of personification of these themes, with the relationship between the two coming off, in my view at least, as a robotic Cain and Abel. The film’s handling of these themes is done in a much more subtle fashion than Prometheus, with it managing to discuss them without being bogged down in long and often boring philosophical discussions that derail the plot.

Quite simply, I never felt bored watching Covenant, with it managing to excite and keep me engaged from the opening to the final credit roll in a fashion that Prometheus never managed.

It did feel however like Ridley Scott was rushing at times, especially film’s climactic encounter with the familiar creature, which while exciting and great fun, ends in a fashion that in a fashion that feels just a bit abrupt. Also, you might people might not be able to hear you scream in space, but you can definitely see the film’s final twist coming about a billion light years off.

With a much more focused plot, tighter pacing, great set pieces and a fantastic dual performance from Michael Fassbender as possibly the greatest character that the franchise has produced since Ripley, Alien: Covenant still fails to reach the glory of the first two films of this long-running franchise, but it is a step in the right direction. A gloriously gory return to form that I sincerely hope will continue into the inevitable sequel and beyond.