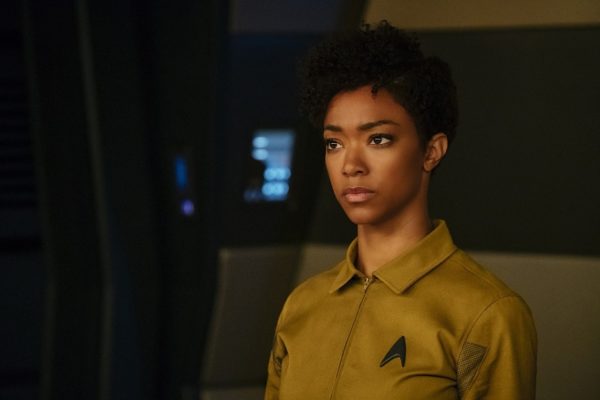 The real world doesn’t always adhere to logic. Sometimes down is up. Sometimes up is down. Sometimes when you’re lost, you’re found

It’s not a unique observation, of course, but in a manner of speaking ‘Context is for Kings’ is actually the first episode of Star Trek: Discovery.

The prior two episodes, ‘The Vulcan Hello’ and ‘Battle at the Binary Stars’, form a prologue of sorts – the series finale of Star Trek: Shenzhou, if you like. Here, we’re picking up again with what’s almost a new pilot on its own terms, introducing us to the rest of our regular cast – Captain Gabriel Lorca, Lieutenant Paul Stamets, and so on.

Nonetheless, it’s still undoubtedly Burnham’s show; she still has the main emotional arc of the series, our focus is primarily on her, and we’re introduced to the other characters through her. It’s effective, though, as a character study – an interrogation of just who this woman is, and what place she’s in after her life collapsed. Particularly engaging is her new dynamic with Saru; he represents a tangible connection to her past, but they don’t have the same relationship anymore. There’s a familiarity, yes, but he’s her superior now – and even then, it’s not necessarily clear they were ever exactly friends anyway. Of all of them, this is the relationship on Star Trek: Discovery I’m most interested by, and most want to see how it continues to develop.

Of course, it helps that Sonequa Martin-Green remains excellent, carrying the show well; if you asked someone what her standout moment of the episode was, they could pick any one of them and have a pretty convincing argument for it being the best. She’s far and away not the only one; Doug Jones gives a wonderfully precise and mannered performance as the aforementioned Saru, while Anthony Rapp sells Paul Stamets’ frustration at the perversion of his research brilliantly. It’d also be remiss not to mention Jason Isaacs as a Starfleet Captain with more edge than we’ve ever seen before – Lorca is an exciting character, one who clearly has a lot of potential going forward. 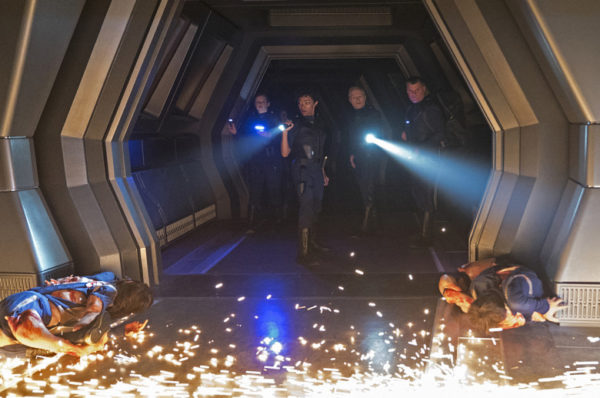 It’s worth commenting on the direction of the episode, too; it’s something I rarely do, because I’m typically a lot more interested in the script side of things, but it’s still worth discussing from time to time. ‘Context is for Kings’ retains the same distinctive aesthetic as the two prior episodes; the revamp given to this series lends Discovery not only a modern edge, but a feeling that it’s unique amongst its franchise.

Most notably, there’s the moment where the episode shifts into horror movie mode, feeling just a little more Alien than Star Trek. It’s a tense, atmospheric sequence; the fear and the danger is palpable. Granted, it’s not perfect – they show just a little too much of the monster, revealing some of the limits of the CGI budget – but if we’ve forgiven the rubber aliens we can forgive a slightly dodgy CGI creature.

More impressive is what this represents – a deft switch between genres in the same tradition as countless Star Trek episodes that went before it. It’s just a starting point, yes, but perhaps also a promise that going forward Discovery isn’t just going to be about a war – an indicator that this series can encompass the same scope as its predecessors.

Admittedly, it’s not the show it would have been had Bryan Fuller stayed on. Perhaps even more than his skill as a writer, it’s his sense of aesthetics that I miss from Discovery; imagine, if you will, a Star Trek series with Bryan Fuller’s visual stylings. (He wanted Edgar Wright to direct the first two episodes! Just think!)

But then, there’s little merit to dwelling on it too much; this is the Star Trek we’ve got, and to be fair, it’s still very pretty looking Star Trek.

It’s this episode where Discovery’s position as a prequel becomes a little more significant, with the series here opening itself to all the classic complaints.

We’re introduced in this episode to a little more of the overarching plot; the USS Discovery’s mission is a research project, an investigation into a new means of instantaneous transportation. In and of itself, it’s a compelling angle for the series to take – scientific advances perfect for a mission of exploration corrupted and co-opted by the galactic war machine, each new development weaponised against the Klingons. You can easily read that as a microcosm of Starfleet as a whole; forced to be soldiers when they should be explorers and diplomats, unwillingly drawn into a wider war.

It’s something of a truism – or more accurately, it’s a truism that it’s a truism – that prequels rarely have any dramatic merit because audiences already know what’s going to happen next. Everyone knows Anakin Skywalker will eventually become Darth Vader, so there’s no tension. Everyone knows what happens in Jane Eyre, so why bother with Wide Sargasso Sea? And, of course, everyone knows that Kirk, Picard et al didn’t have this means of instantaneous transportation, so why bother with Star Trek: Discovery?

Of course, that’s missing the point more than a little bit. Not knowing whether or not a character will die, or what will happen in a war, or whether the experiment will succeed, isn’t always the point – the story isn’t always about the destination, if you like. (Though it is worth giving some consideration to the people who aren’t steeped in knowledge of Star Trek; the new viewers who Discovery needs to attract, the ones who aren’t watching this as a prequel exactly.) There’s a dramatic merit in exploring the journey, to continue the metaphor; there’s a value to the character study, examining the interactions between Michael Burnham and the rest of the crew.

And of course, even then, there’s still a mystery – just because you think you know the final picture, you don’t know the details.

Arguably, then, you can read ‘Context is for Kings’ as one final rebuke to all of Star Trek: Discovery’s detractors; we’ve seen their take on Star Trek in 2017, and now here’s a justification of why it still works as a prequel. At this stage in the season, it’s a pretty good place to be – and I can’t wait to see where it goes next.