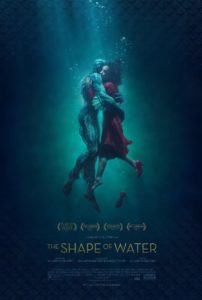 An otherworldly fairy tale, set against the backdrop of Cold War era America circa 1962. In the hidden high-security government laboratory where she works, lonely Elisa (Sally Hawkins) is trapped in a life of isolation. Elisa’s life is changed forever when she and co-worker Zelda (Octavia Spencer) discover a secret classified experiment. 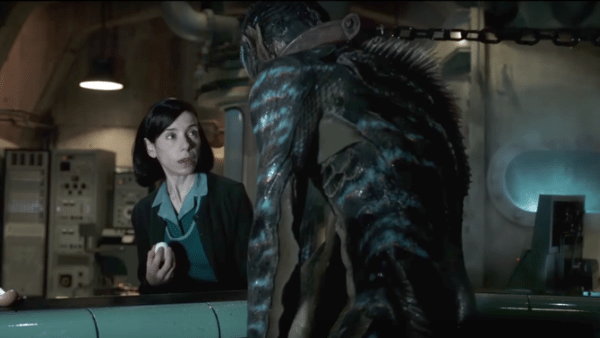 The Shape of Water contains physically intimate expressions of love between two separate pairings of characters, both inordinately different in tone. One is rather awkwardly aggressive with no real affection shown by either member of a married couple, while multiple other sequences depict Sally Hawkins’ sign language communicating mute Elisa and the film’s centralized human reminiscent amphibian creature in various stages of passionate lovemaking. Wisely, director Guillermo del Toro (Pan’s Labyrinth, Crimson Peak, and currently collaborating with celebrated video game director Hideo Kojima on the hotly anticipated game Death Stranding) never gets too gratuitous with these acts, allowing the juxtaposition to breathe, but most importantly, further investing audiences into what will go down as one of the most magical fairy-tales of its generation.

Functioning as an utterly charming take on the classic Beauty and the Beast and Creature from the Black Lagoon fables, the Cold War-set love story focuses on the introverted, reclusive, and sexually inexperienced aforementioned mute Elisa, a cleaner working at a high-security level government facility. Right from the beginning Sally Hawkins is given fantastic on-screen partners in Richard Jenkins and Octavia Spencer that jive well with her phenomenal performance built solely on hand gestures and body language (Jenkins makes a fine best friend working on his career as a painter, while Spencer’s motormouth skills and sassy banter make conversations amusing and easily involving), but as she notices the creature being housed in isolation inside a large rectangular pool (referred to as The Asset) at the laboratory, things get complex and become transfixing. 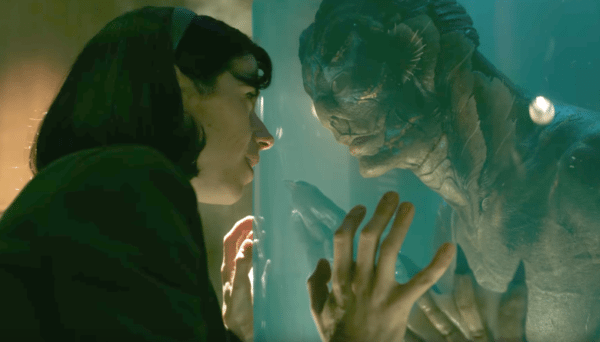 Theoretically, Elisa should be terrified of this unknown aquatic monster. After all, she is only let into this specific area of the establishment to sweep up gobs of blood, as it had somehow wounded and removed two of Strickland’s (Michael Shannon going full-on evil mode here only interested in using the merman to harness whatever abilities it possesses as a weapon against the Soviets in an effort to make his military superiors proud) fingers prior. However, love quickly blossoms as the pair of outsiders connect; The Asset is enthusiastic to have a visitor with such warmth that teaches him sign language, classical tunes, delivers delicious eggs, and more. Stuck in a world of loneliness, from the second they lock eyes for the first time they accept each other for the distinctly unique individuals they are.

Whenever Elisa isn’t around, the amphibian is usually tortured or shocked with batons by scientists, enraging her to enlist the help of her only friends to pull off a heist mission. None of this would be engaging if it weren’t for the incredible expressive chemistry on display between Sally Hawkins and Doug Jones (teaming up with del Toro yet again and created completely by practical effects, and if there is any CGI it’s impossible to notice). If anything, as the romance heats up The Shape of Water becomes more emotionally gripping; the abuse inflicted on the gentle merman hurts us simply watching it. We feel for these lonely souls and desperately want them to find any way to be together, or certainly not The Asset to be poked and prodded for data until death and utilized as a weapon for war. 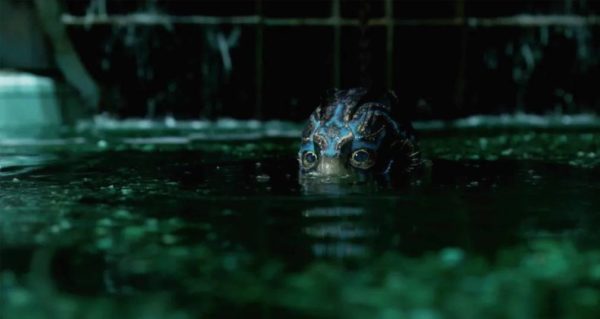 This isn’t just an average spin on the all-important theme of loving someone for reasons beyond physical appearances or limitations though, as there are briefly subtle looks at other relationships with all of them not doing so hot. Even one quick segment shows an era-specific kind of taboo love rudely and heartbreakingly rejected, opening up not just the eyes of the character, but the audience’s, also emphatically sending the message to embrace all real friends for who and what they are. The Shape of Water is far more ambitious than exploring interspecies romance., as all of the characters struggle in their love life to some degree, but it’s the most unorthodox one of all flowering into something truly special, namely because it is coming from genuine affection.

Still, the focus of the film is always squarely on the relationship between Elisa and the amphibian creature, building to profoundly moving and exquisitely captured tender scenes of underwater love. Guillermo del Toro also dazzlingly uses splashy screens of water and appropriate sound effects to transition between scenes, and imbues the aesthetics with oceanic color grading both indoors and outdoors, all showing that his visual eye is once again in top form. Original compositions by Alexandre Desplat match that grace, mimicking the wondrous exploration of love with melodic sounds. He and del Toro even whip up a powerful dream sequence in the vein of classical cinema that incorporates timeless licensed music complete with singing; it’s the most arresting scene of the movie until the ambiguously enchanting climax.

There is not one false note or one missed beat in The Shape of Water; the romance is perfectly brought to life (even The Asset himself while not harmless unless provoked is not entirely a flawless being, actually doing something horrific but somehow swiftly forgivable). Naturally, Michael Shannon’s Strickland is an underdeveloped but terrific villain, especially when the script sets him loose on a warpath; I had the pleasure of meeting him before the movie started coming away with the impression that he is an amazing person in real life, although badly wanted to punch him in the face by the time the credits rolled. He’s that despicable here.

Without a doubt, The Shape of Water is going to rack up numerous Academy Award nominations and it will deserve every single one. It is so mesmerizing and stirring that Pan’s Labyrinth no longer holds the title of Guillermo del Toro’s masterpiece. The Shape of Water is the absolute best film of the year.