For many years, Neil Gaiman’s novel American Gods was thought to be unfilmable. It was felt the novel was too grandiose for the big screen, with too many characters and too much story to fit into one 2-hour or 2-hour plus film. Almost 20 years later, Michael Green and Bryan Fuller thought to develop it as a television series for Starz starring Ricky Whittle (The 100) as protagonist Shadow Moon and Ian McShane (Pirates of the Caribbean: On Stranger Tides) as the mysterious Mr. Wednesday. 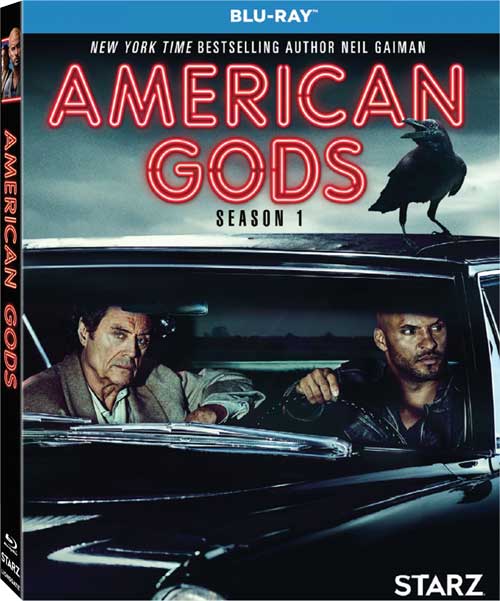 The 8-episode first season adapts roughly a third of the novel. Shadow Moon is released early from prison after learning his wife has died in an unfortunate car accident while having an affair with his best friend. Adrift, he meets the mysterious and enigmatic con-man Mr. Wednesday, who offers Shadow a job as his bodyguard. The two begin a cross country journey where Shadow learns gods are more than just myths and a war is brewing between the gods of old and the new, powerful gods of the modern world.

The show takes full advantage of the book’s fantastical nature. The story is well-paced, with each episode being an interesting and engaging piece of Gaiman’s ambitious world. One of the highlights of American Gods is the cast they assembled, from McShane and Whittle to Gillian Anderson and Emily Browning. McShane shines as Wednesday, embodying the mischievous god right off the pages. Whittle does a great job as Shadow, making him a relatable and sympathetic character and filling the role with a lot of charm.

Browning is similarly great as Laura, Shadow’s not-quite-dead wife, and shares nice chemistry with Whittle. There’s an episode entirely dedicated to her, that is one of the best episodes of the season, that paints Laura as an almost tragic character while making her fairly sympathetic despite some of the awful things she does. Bruce Langley performs with a lot of snark as Technical Boy that just makes you want to smack the spoiled brat while Gillian Anderson does an excellent job as Media, appearing in a variety of personalities throughout the season (and does a killer David Bowie impression). Another standout actor is Orlando Jones, who makes his introductory scene as Mr. Nancy one of the best and memorable scenes of the season.

Much like Fuller’s previous series, Hannibal, American Gods is a visually stunning series with a lot of great scenery, cinematography and imagery. Fuller, Green and their team really made the season feel fantastical through the visuals. The effects on the gods’ powers and other settings are well done, helping imbue the series with a lot of detail. Even the practical effects match the more CGI-influenced effects. Laura’s deteriorating state, for example, is one such effect that is really well done throughout the season.

Only the pilot episode, ‘The Bone Orchard’, contains audio commentary on the set, but it does have two separate tracks. One includes Bryan Fuller, Michael Green and director David Slade talking about the creation of the series and the pilot while the other has Ricky Whittle and Ian McShane discussing the same topics as well as creating their takes on Shadow and Wednesday. It’s a bit unfortunate there is not more audio commentary, but the other features make up for it.

This is a near 16-minute look at how Neil Gaiman thought of American Gods. In this feature, he travels to Norway to a Viking museum where he first got the idea for the novel and sits down with an academic professor to talk about vikings and the old gods that were worshipped. It’s a pretty interesting look at his thought process in creating the story.

A spotlight on the old gods from Wednesday, Mad Sweeney, Czernobog and Mr. Nancy.

Much like the previous feature, it takes a look at the new gods of Technical Boy, Media and Mr. World.

What is American Gods?

This feature has the cast and crew discussing what they think American Gods is about. They discuss the themes that are important to them, such as faith and what belief means in today’s world, and why Gaiman’s book struck a chord with them. It last roughly 5 minutes.

This 5-minute feature has Green, Fuller, Gaiman and some of the other cast talk about the differences between the book and the show. The big three behind the project discuss adapting the novel and how Gaiman was accepting of some changes to the show as well as broadening some of the characters seen in the ‘Coming to America’ sequences of the book to have more of a role in the show.

Explore the Crocodile Bar in 360 Degrees

The Crocodile Bar is one of the most elaborate sets from the show and this 5-minute feature takes viewers on a virtual 360 degree tour of the set. The feature has commentary from Fuller, Green, McShane, Whittle and Mad Sweeney actor Pablo Schreiber about the bar’s look and filming in it.

A look at the creation of the title sequence for American Gods. It’s a pretty interesting look at how the show was able to incorporate so much mixed iconography into the title and how Elastic, the company behind the titles for Game of Thrones, Westworld and Marvel’s Luke Cage, adapted Gaiman’s ideas of the old gods vs. the new gods and Americana into the sequence.

While the Blu-ray set is lacking in audio commentary, it does have a video commentary for the season finale, ‘Come to Jesus’. Ricky Whittle, Emily Browning, Yetide Badaki (Bilquis), Bruce Langley and Orlando Jones give their thoughts on the finale and the overall season as you watch the finale along with them. Its pretty entertaining to watch and clear that the assembled cast are having fun and have great chemistry off the set. It’s nice to see them cut loose and joke around while talking about what they’d like to see for season 2.

The Road to American Gods

This is by far the biggest draw of the special features. Clocking in at just over 2 1/2 hours, this documentary goes into a great amount of detail of how they show came together. Its split into eight parts so you don’t have to watch it all at once, but its an in-depth look and discussion with Fuller, Green and Gaiman on how they cast the roles (revealing someone else was nearly cast as Wednesday after they wanted McShane for the role of Czernobog) and how they thought to adapt one of Gaiman’s most ambitious and ‘unfilmable’ novels.

It’s also a bit of a bittersweet look at Fuller and Green in the wake of the news they won’t be showrunning season 2. They talk about the budget and how cable networks like HBO and Starz offer less restrictions than most other networks, but given that the supposed reason behind their exit is budget cuts as the season’s budget ballooned to Game of Thrones-levels, the discussion is a little ironic now.

The American Gods Blu-ray has a pretty impressive set of features. While the lack of audio commentary is disappointing, the other features more than make up for it, especially the ‘Road to American Gods‘ documentary. Fans of the show, and of the book as well, will really enjoy how the series came together and was adapted.